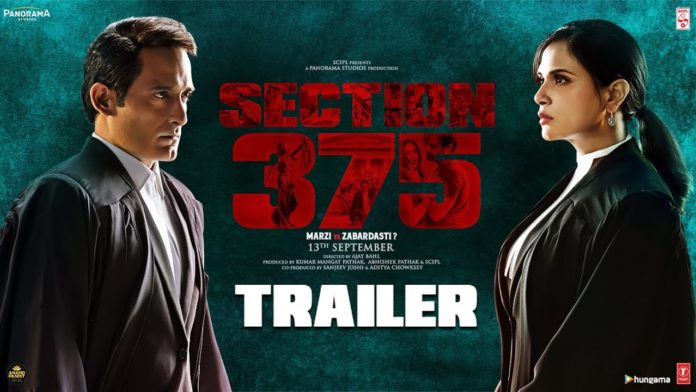 Rape as saleable masala was often a norm in mainstream Bollywood of yore, to rouse perverse male titillation as well as give the hero a valid reason to unleash violent revenge. Few films utilised the heinous act to say something substantial – the odd “Insaaf Ka Tarazu” or “Ghar” comes to mind.

“Section 375” brings back the subject of rape on the Bollywood screen, quite unlike it has ever been done before, and with rare profundity. The film tries understanding law and justice as detached entities through the tale of a rape, and how these two notions are rarely ever fated to meet.

Writer Manish Gupta establishes a taut premise within the first quarter. A rookie costume designer arrives at the apartment of a bigshot filmmaker to discuss designs. They end up alone, he tries raping her and, within hours, is arrested. The rape itself is not shown to begin with, so we are left with scope to draw inferences. It’s an open-and-shut case, declares the media and public alike. The sessions court gives the filmmaker a 10-year rigorous imprisonment verdict.

Except, all is not over yet. The filmmaker, Rohan Khurana (Rahul Bhat), hires a top lawyer, Tarun Saluja (Akshaye Khanna) to clear his name in High Court. Pitted against the mighty Saluja is the young public prosecutor Hiral Gandhi (Richa Chadha), who was incidentally his assistant at one time. As the narrative unfolds, Saluja starts ripping open the case, exposing anomalies at every step — from police probe to forensic reports that were earlier used to nail Khurana. His arguments are foolproof and, suddenly, the case is no longer as simple as it had seemed.

Director Ajay Bahl never loses focus on what he wants to state: When it comes to a crime as sensitive as rape, simply following the law is not necessarily enough to ensure justice is served.

In content and execution, “Section 375” is not a film for all — for the reason that it makes no attempt to dilute its complex text in order to reach out to a larger audience. Rather, it reserves a cerebral tone all through, unfolding at a languid pace and asserting its opinion with quiet assurance.

The objective of the film was never to establish who is guilty and who is not, you realise as the story draws to its end. In life there are never clear victims and villains, “Section 375” reminds.

A courtroom drama thrives or collapses depending on writing. You always knew this film had an advantage in this context, seeing Manish Gupta’s name as scriptwriter. Gupta, who wrote Ramgopal Varma’s “Sarkar” and directed “The Stoneman Murders”, has quietly carved a distinct idiom as a storyteller. “Section 375” is a script that just fits Gupta’s idiom.

The interrogations, arguments and retorts that dominate the courtroom exchanges of the film wholly benefit from Gupta’s creativity. There are moments powerful enough to virtually transport you to the courtroom of the high-profile, in-camera case.

If the film’s writing instantly endears it to those nitpicking for cinematic aesthetics, “Section 375” finds its trumpcard at the popularity stakes in Akshaye Khanna’s performance.

Quite simply, Akshaye’s is one of the finest male performances Bollywood has seen in recent times. Cold fury, mockery, indulgence or irony – you name it, he executes it with a simple tweak of gaze. Moving away from the ‘hero domain’, Akshaye has been freely playing around with image in recent films such as “Mom”, “Ittefaq”, and “The Accidental Prime Minister”. His latest role by far outstrips anything he has done over the past decade. “Section 375” should rank among Akshaye Khanna’s most unforgettable roles, along with “Dil Chahta Hai” and “Gandhi My Father”.

Surprisingly, it is Richa Chadha who suffers – struggling in most parts to come to terms with a character that seems inadequate all through. She comes alive in individual scenes, though, thanks to her proven screen presence.

Rahul Bhat is impressive for the way he balances Rohan Khurana’s arrogance and vulnerability. Meera Chopra, cast as the young costume designer Anjali who acts as the trigger for the tale, sadly gets very little to do. She barely manages to make a mark. Sandhya Mridul is a delight to watch in a cameo.

“Section 375” makes you do serious thinking about an important contemporary issue without getting preachy about it, and yet never slipping into the flippant mode. If anything, one hopes that the film will rejuvenate popular interest in the ongoing conversation about women’s safety and laws pertaining to the subject. (IANS)