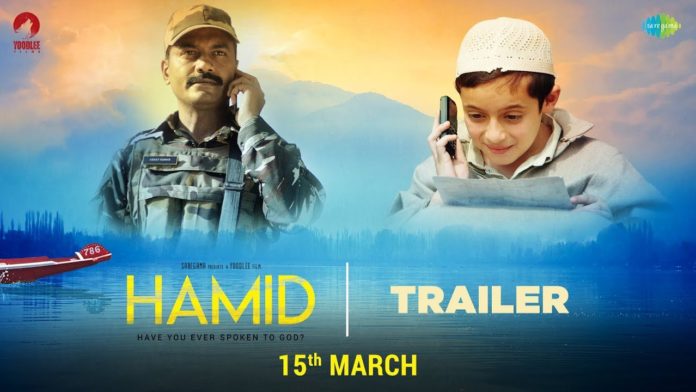 Set in Kashmir and inspired by true incidents, Aijaz Khan’s film Hamid is a fictional tale with local flavour and universal appeal. An adaptation of Amin Bhat’s play ‘Phone No. 786’, it’s a well-crafted portrayal of a boy’s loyalty to his father and his determination to get him back to make his family whole again.

Seen through the eyes of Hamid, 7-year-old son of Rehmat, a shipwright (a person who makes boats for a living), the film is a testament to the lives of those waiting for their loved ones to return. It reveals their pain and grief.

To balance the Yin and the Yang of the story, we have Abhay the Indian soldier suffering from post-traumatic stress disorder, deployed there to bring peace.

The narrative begins on a plain note depicting life in the state and the father-son relations, till one fine day without much ado, the father disappears.

Devastated by his disappearance, Hamid tries searching him till one of his classmate informs him that his father has gone to Allah. One of Rehmat’s colleague and Hamid’s well-wisher informs him that Allah has taken away his father because he was a good craftsman and a decent human being.

So from thence, Hamid tries contacting “Allah” to convince him (Allah) to send his father back. How he goes about it, forms the crux of the tale.

The tale is narrated in a simple and yet savvy manner with layers to interpret. It touches upon issues like the state of affairs in Kashmir, how life has changed and the hardships the people have to bear. It also gives us a glimpse into the lives of the armed forces who are there to maintain peace and the contemptuous behaviour of the state police.

The texture of the film is similar to a scenic art-house film. Apart from the plot, locales and dialogues between Hamid and Abhay keep the audience riveted to the screen.

The casting too is pitch perfect. Each actor plays his part with all honesty. Rasika Dugal is a competent actress and as Hamid’s stoically suffering mother Ishrat, she is conscientious and convincing. So is Sumit Kaul as Hamid’s father Rehmat and Vikas Kumar as the repentant Abhay.

But the star of the film is definitely Talha Arshad Reshi who with sparkling eyes and arresting demeanour, portrays Hamid with all earnestness. He is simply charming. You’ll love his spunk and honesty and he does full justice to his character. There are moments when you laugh at his naivety and your heart will bleed when he cries upon his self-realisation.

There are some moments that seem forced in the narrative, especially when at a bus stop, when a funeral passes by, Rehmat stops to “give shoulder” to the coffin, despite knowing that his son would miss the bus. At another moment, in the army barrack when soldiers are dancing to music and the channel is switched by Abhay. These two episodes are lazily designed and executed.

DOP John Wilmor deserves kudos as the cinematography, is yet another highlight of the film. His lens captures the beauty of the locales as well as emotions of the people with equal candour. Some frames appear layered, especially the last scene when Hamid’s red coloured boat glides across the serene waters of the lake. That images is haunting. It remains with you much after you leave the theatres. (IANS)