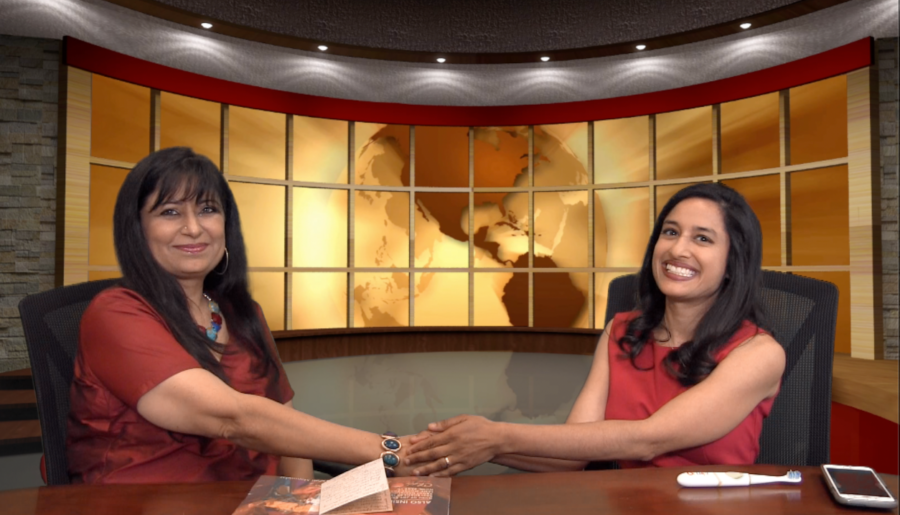 CAMBRIDGE, MA– After realizing her million dollar prize dream and writing a book, Dr. Anubha Sacheti has many more dreams—one of them empowering all dreamers, especially young girls. With her recent million dollar win, Sacheti plans to make a big difference in the world of pediatric dentistry.

When her Team Grush won the million dollar prize on season 1 finale of the tech reality TV challenge America’s Greatest Makers in May, Dr. Sacheti said: “As a dentist, I have been committed to preventing tooth decay, a common chronic disease among children. As a mother, I wanted to help end the ‘battle in the bathroom’ over brushing. This dream is now a reality, as soon as Grush will be available in America.”

In an exclusive video interview on Dreamcatchers with Dr. Manju Sheth, Dr. Sacheti, a dynamic woman with a great vision and mission, shares her dreams, gives some excellent advice to young women and also tips on how to balance it all: marriage, kids, career, service and entrepreneurship. She also demonstrates her “Gaming Tooth Brush ..Grush.”

Dr. Sacheti is a practicing pediatric dentist in Massachusetts. She graduated from Harvard School of Dental Medicine and Boston University’s Pediatric Dentistry Residency Program. In addition to working part-time in private practice in Fitchburg, MA and teaching at Harvard School of Dental Medicine, she has been the Massachusetts State Leader for the Office of Head Start Dental Home Initiative.

She is the current secretary of the Massachusetts Academy of Pediatric Dentistry and the national AAPD Council on Government Affairs. Dr. Sacheti was named as a recipient of the Massachusetts Dental Society’s “Top Ten Under Ten” award for dentists who have been in the profession for 10 years or less.

Dr. Sacheti is a Director of the EDIC malpractice insurance board. She also co-authored  “Happy, Healthy, Teeth”, a guide to children’s dental health endorsed by AAPD. Most recently Dr. Sacheti became the Chief Dental Officer developing a gaming toothbrush system for children, called GRUSH, Inc. In May, Dr. Sacheti, along with her two business partners at GRUSH, Inc., won the grand prize on America’s Greatest Makers for their toothbrush invention. Dr. Sacheti was also named India New England finalist for Woman of the Year 2015.

All three members of Team Grush are parents and invented the interactive digital toothbrush based on their experiences of trying to get their kids to brush. The invention transforms teeth brushing into a series of fun and virtual games, entertaining and motivating children while allowing adults to digitally track brushing habits. Grush beat 23 other teams with inventions in areas as diverse as healthcare, sports and fashion – all built on Intel technology.

America’s Greatest Makers is produced by MGM Television with Emmy®-winning producer Mark Burnett (Survivor, Shark Tank, The Voice) serving as executive producer. MGM is the international distributor and the show is broadcast on TBS.