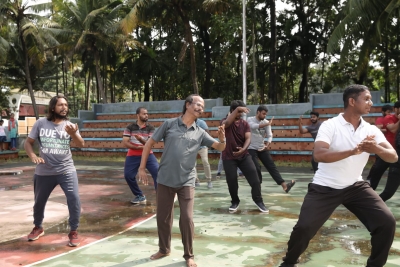 Director Rojin Thomas’s Malayalam film ‘Home’ presents veteran actor Indrans in a role that many parents can relate with. This Malayalam family drama meticulously defines modern-age relationships between parents and their children.

Indrans plays the role of Oliver Twist, a former video cassette shop owner. As his elder son Antony (played by Sreenath Bhasi), comes back home to Thiruvananthapuram to find creative inspiration for his next film, Oliver finds himself facing a ‘generation gap’ between them.

What follows is a bittersweet story of a father learning the ropes of social media and doing other things to find validation and attention of his two sons. The role of younger son Charles is played by Naslen.

Interestingly, the story also brushes over the topic of seeking help for mental health. Something, which otherwise is still not part of family dramas.

Rojin has brought back the charm of his direction with ‘Home’, something that we missed after his directorial debut ‘Philips and the Monkey Pen’. He has translated emotions into every scene beautifully.

However, the story could have been told in a shorter time span too.

Actor Indrans is the star of the movie. He smoothly slides into his character, which makes you forget about the actor and connect strongly with father and his emotions on the screen. His acting leaves you with a mix of emotions and a smile on your face. His simplistic nature and confusion feels so real. Indrans delivers yet another impactful performance that leaves you with an after-effect.

Shreenath Bhasi brings out the emotions of a young, ambitious but lost, man very well. Certain scenes make you want to empathise with dilemmas of his character Antony, while others make you angry at him for not understanding his father’s efforts and his journey.

Watch ‘Home’ if you like relationship dramas and don’t mind stories that can leave you with a strong emotional aftertaste. After a long wait, Malayalam cinema has brought a sorted, beautiful story back home. (IANS)