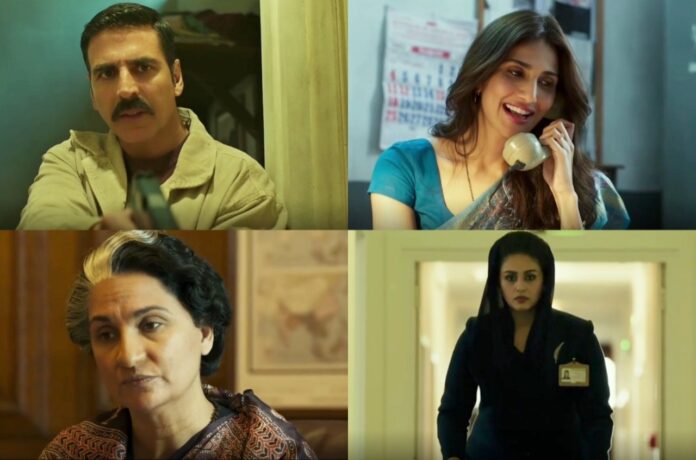 Mumbai, Aug 18 (IANS) ‘Bell Bottom’ features Akshay Kumar as a RAW agent, who pulls off the impossible mission of re-capturing a hijacked plane and landing it safely on Indian soil with all the passengers alive, without any bloodshed. It is slick and stylish all along.

The Akshay Kumar character, Anshul, is driven not only by the call of duty, but also because of a personal loss. His mother, an asthma patient, played by Dolly Ahluwalia, had died when an Indian flight had been hijacked by the Pakistanis. She had lost her life because she’d been denied life-saving oxygen by the hijackers. Akshay Kumar’s character therefore is focused, determined and goal-oriented.

The film stars Vaani Kapoor as the leading lady (Akshay Kumar’s wife). Her character has an amazing twist to her, which is revealed much later in the story. Lara Dutta plays Mrs Indira Gandhi and Huma Qureshi, a special agent working for the Dubai government.

Akshay Kumar has definitely nailed the look and nuances of a special agent, who lives a normal life but drops everything when duty calls. He is in top form looking slick and suave in his retro look and for the most part holds the movie with his acting skills. He does justice to the character he plays. The bond between the mother and son is sweet.

Vaani Kapoor has a sweet but impactful role. She excels in playing a good-humoured character and looks stunning, and brings a lot of freshness when on-screen. For Lara Dutta, this could be a career-defining role. She looks so much like Mrs Gandhi and excels in her performance. Huma Qureshi, especially when her real identity is revealed, will definitely blow you away.

The narrative is gripping and every character comes with a back story or sudden twist, so the audience doesn’t lose interest.

The massive scale of the movie is outstanding; the makers (Pooja Entertainment) have not shied away from spending to make it larger than life and for achieving this in the middle of the pandemic is commendable.

The editing in the first half could have been crisper, but the second half is so smooth and pacy that you wouldn’t know when the film ends.

The special effects (VFX) could have been better. The movie was shot in Scotland, but never once do you feel any liberties were taken with the narrative’s authenticity. The production designer who recreated the 1980s deserves special mention.

The songs are few but well-placed. The ones that stood out were the gurudwara song ‘Khair Mangdi’ and the title track ‘Dhoom Taraa’, which just stays with you much after you leave the theatre.

‘Bell Bottom’ is a must-watch on the big screen. (IANS)