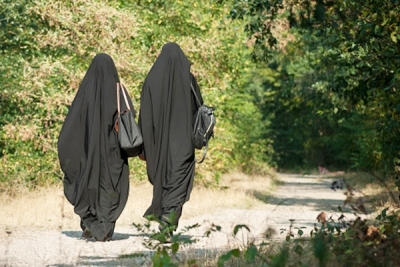 Thiruvananthapuram–The issue of ‘Love Jihad’ has cropped up again in Kerala after reports that the Centre has denied permission to return to four women, who had gone from the state to Afghanistan along with their husbands and children to live in the “Islamic Caliphate” promised by terror organisation IS.

Four women — Sonia Sebastian alias Ayisha, Merin Jacob alias Merrin, Nimisha Nair alias Fathima Isa, and Raffaela — had gone with their families to Afghanistan to live in territory of the Islamic State in Khorasan Province (ISKP) in 2016-18. Their husbands were killed in separate attacks and the women surrendered before the Afghan authorities in November 2019.

Senior Indian officials including from the External Affairs Ministry and intelligence agencies had interrogated these four women in Kabul prisons and had reported to the Indian government that these women were highly radicalised.

However, Nimisha’s mother Bindu has already lashed out against the reports that the Indian government is not preferring to allow these women back into the country.

Addressing media at Thiruvananthapuram, Bindu said: “Why are they not allowing my daughter back into the country. Let her undergo a trial and be given the punishment according to the law of the land. She has a small child and I don’t know why the authorities are so adamant on this.”

It was alleged that several Hindu and Christian girls were lured by Muslim youths, taken to IS strongholds, and trained as terrorists. The BJP, RSS and other Hindu organisations were at the forefront of the campaigns that girls were being lured under the guise of love, converted, and several of them were radicalised to end up in places like Afghanistan and Syria where they were doubled up as fighters for the IS.

Way back in 2009, Justice K.T. Sankaran of the Kerala High Court, hearing a bail plea of a Muslim youth arrested allegedly for converting two Hindu girls, had said: “The police reports revealed the blessings of some outfits for a concerted effort for religious conversions.” He observed that “indications of forceful religious conversions under the garb of love” were found and called for legislative interventions to prevent such acts.

Meanwhile, the RSS and other Hindu organisations have already said that the issue of ‘Love Jihad’ has to be taken for major discussion with the new developments.

Talking to IANS, senior RSS leader and convenor of think tank ‘Prajnapravah’, J. Nandakumar claimed: “You can call it ‘Love Jihad’, ‘Romeo Jihad’ or anything but these four women are a classic example as to how there is a planned and concerted effort to lure Hindu and Christian girls and how they were radicalised and sent across to fight in Afghanistan. The major political parties have become silent or looked the other side fearing the repercussion from an organised vote bank.”

“These four women should not be allowed to come back to India as they are already radicalised and IS chief Abubakr Baghdadi had clearly said that the trained mercenaries must focus attention on their home country to fight for the Caliphate. They will definitely abide by the call of Baghdadi and will be a major threat to internal security if they are allowed to come back to India.”

The Catholic church has already come out to allege several girls from the community are being lured away by Muslim youths into marriages and conversions. The Syro-Malabar Church’s synod, an apex body of Catholic Bishops chaired by Cardinal George Alanchery, had accused the Kerala Police of not viewing the matter seriously.

“It is a reality that ‘Love Jihad’ is happening in Kerala in a planned manner targeting Christian girls,” it said, noting that out of 21 girls recruited to Islamic State terror outfit, half of them were Christians.

Its Kerala state President, Nasarudeen Elamaram, speaking to IANS, maintained: “There is no such thing as ‘Love Jihad’ and no Muslim organisation in the country had accepted the existence of the Islamic State. We have strong doubts as to who was involved in the creation of the IS.” (IANS)