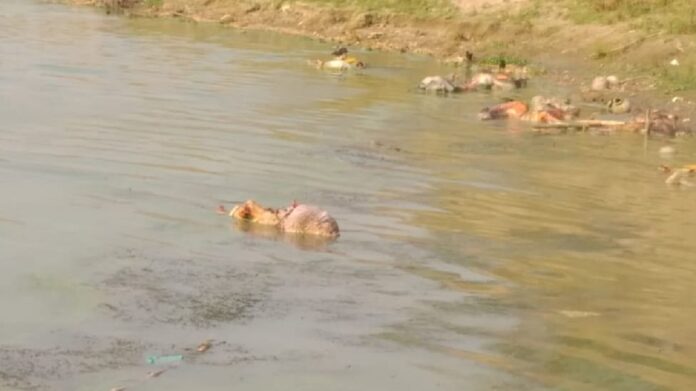 Patna– The relatives of a man, who died due to snakebite in Bihar’s Bhagalpur district, dumped his body into the Ganga on Sunday, despite objections of the local residents.

The locals made video clips of the incident, which occurred in Kahalgaon block under Bhagalpur.

Mithilesh Kumar died due to snake bite in his native village Nawada Bazar in Banka district. His family members took his body to the Barari Ghat in Bhagalpur but the Dom Raja of the Ghat demanded Rs 1 lakh to allow them to dump it in the Ganga.

In Bihar, there is a tradition that the last rites of someone who died of snake bite are doing by putting the body into the Ganga, along with a banana tree trunk.

The family members negotiated with Dom Raja and the latter agreed to Rs 11,000 but as they did not even have that money, they took the dead body to Kahalgaon, some 50 km away from Bhagalpur city.

They negotiated with the Dom Raja of Kahalgaon Ghat for Rs 1,500, and also contacted a boat owner, and set a deal for Rs 2,500. Then they took the dead body to the middle of Ganga, tied it to a banana tree trunk and dumped it in the river.

Local residents claimed that the District Magistrate had deployed a judicial magistrate at every cremation ground when the corona infection was at peak but these were withdrawn from June 1.

Contacted for comments, R.P. Sharma, a duty officer of Kahalgaon police station, said: “We have received a complaint pertaining to this case and we are trying to contact the deceased’s family.”

During the severe second wave of corona, people in several districts such as Buxar, Bhojpur, Patna, and Bhagalpur dumped a large number of dead bodies into the Ganga. (IANS)