WESTON, MA–For me, the melodic resplendence of spring in New England is defined by the LearnQuest Music fest, which is coming soon on March 30-April 1 at Regis College in Weston, MA.

“It is heartening to see the convergence of the greatest Indian musicians and true connoisseurs of the classical arts in the Boston area,” said Pradeep Shukla, the Founder and President of LearnQuest.

Personally, I am awestruck at the galaxy of Classical Indian musicians that LearnQuest attracts and then how beautifully the program is strung together by a dedicated team of volunteers.

“A real treat awaits the music lovers of Boston with the masters of melody both Hindustani and Carnatic. In addition, this year marks a few new experiments, especially in fusion”, according to Ravi Arora, the chair of this 13th Annual Music Conference.

The Carnatic vocal lineup is an unprecedented gallery of geniuses led by Padma Bhushan recipient Vidvan T.V. Shankarnarayanan, and Vidushi Bombay Jayashri, who has sung and composed in practically all genres of music from classical, film, fusion and has trained generations of stellar musicians. Then come the stellar young voices of Sikkil Gurucharan, who is steeped in deep musical pedigree and Biotechnologist turned musician, Aishwarya Vidhya Raghunath.

On the Hindustani front, this year features Kaushiki Chakraborty, who has established herself as a heartthrob of the connoisseurs for singing a wide range of classical and popular music with élan.  Then there is young Rachna Bodas of Gwalior Gharana and the dynamic Vocal-Sitar duo of Debapriya Adhikari and Samanway Sarkar, who have enthralled and won the hearts of Boston audiences.

The instrumental lineup will showcase the Padma Shri awardee Pt. Satish Vyas on Santoor and Sarod virtuoso Pt. Tejendra Narayan Majumdar; an exciting Carnatic-Hindustani jugalbandi by Vidvan Shashank Subramanyam (Carnatic Flute) and Pt. Purbayan Chatterjee (Sitar) both of whom have a global fan base that worship their mastery.

There are a few new faces for the Boston audiences including the members of the Hindustani Taal-Vaadya-Gaan ensemble that has Ramendra Singh Solanki (Tabla), Sarwar Hussain (Sarangi), Sameehan Kashalkar (Vocals) and Sukhad Munde (Pakhawaj).

The main three-day conference will be preceded by a concert by Ustad Zakir Hussain and Rakesh Chaurasia on March 23 at Sanders Theater in Cambridge, MA. This program is jointly organized by LearnQuest and World Music.

For more information and tickets: LearnQuest Festival of Music Tickets 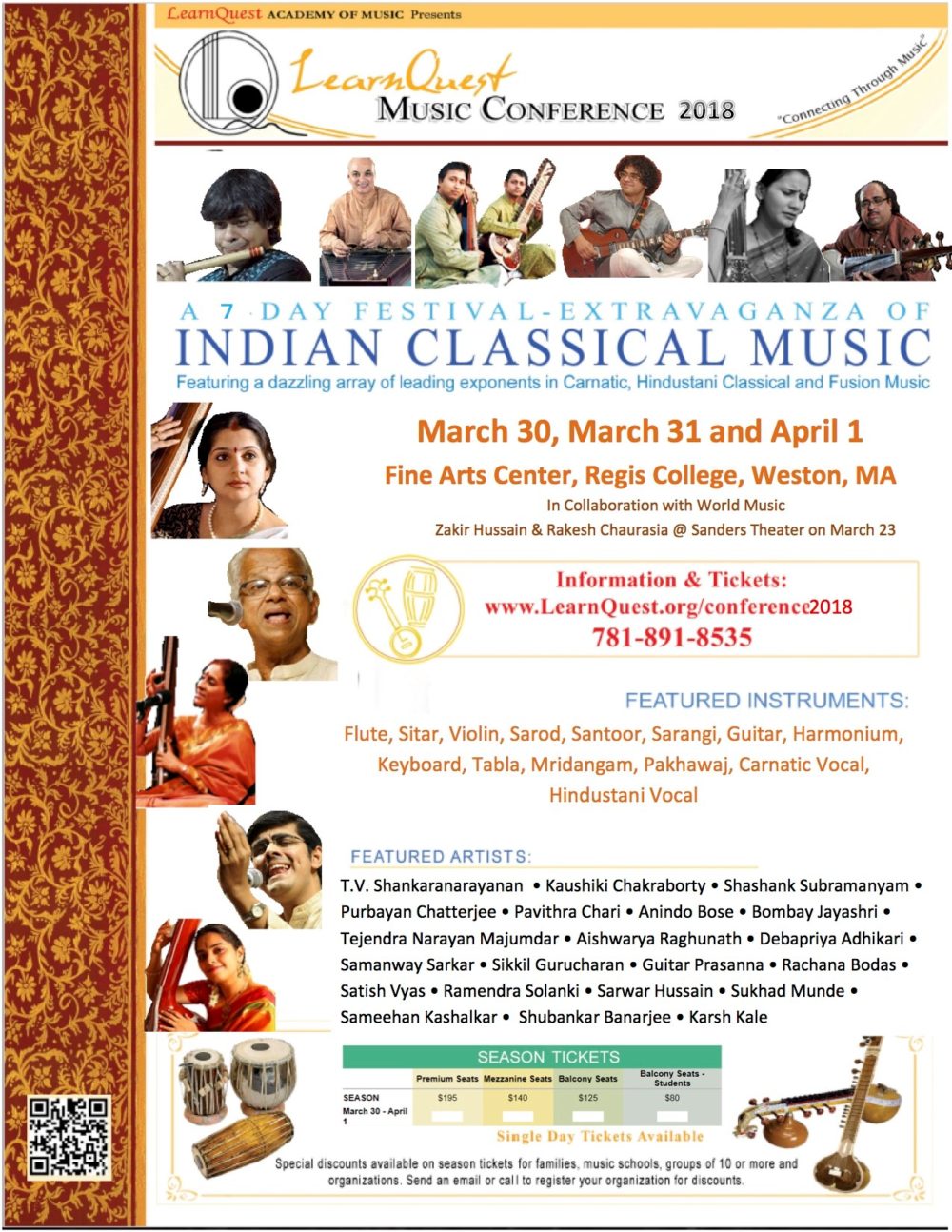