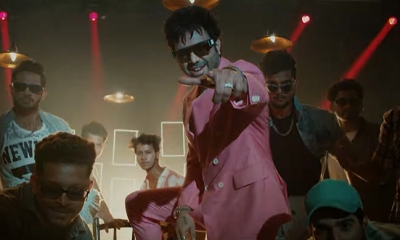 Mumbai– The famous Punjabi song has got another version, this time by music composer duo Javed-Mohsin, who have given music in Bollywood films like ‘Suraj Pe Mangal Bhari’ and ‘Shershaah’.

Titled ‘Kaali Teri’, the song features Suraj Jumani and Riva Arora showing off their dance moves. Suraj was earlier seen in a song called ‘I Love Dubai’, which was a tribute to the beautiful city of Dubai starring Sania Mirza, Chris Gayle and many popular artists from Dubai.

Speaking about his experience of working on ‘Kaali Teri’, Suraj said: “He had a blast shooting with the magical duo of Bollywood Javed-Mohsin and is grateful to the director Mudassar Khan for making it so much easier and for bringing life to the track.”

‘Kaali Teri’ has been sung by Brijesh Shandilya, Ritu Pathak and Deane Sequeira and has been penned by Danish Sabri. The song has been directed and choreographed by Mudassar Khan, who judged the reality television dance series ‘Dance India Dance’ from season 4 through season 6.

The song, released under Blue Music Label, is available to stream on YouTube. (IANS)