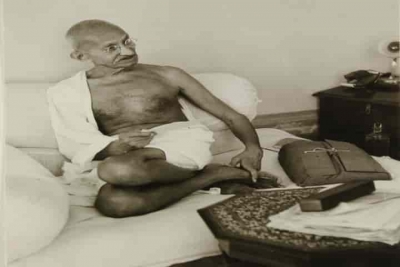 New Delhi– The ties between India and Israel date back to several centuries and can be traced to ancient times. Art is one sphere which truly manifests the influence of these two regions and its people on each other and example of this, is the ongoing virtual group exhibition “Heat and Dust Between India and Zion”. A collaboration between India International Centre and the Embassy of Israel in New Delhi, the exhibition will be on till July 25.

Curated by two well-known artists, Dr. Shimon Lev and Yael Margalit, whose works too are on display, the show is an amalgamation of diverse mediums and issues. It attempts to look at how Indian motifs and influences are depicted in Israeli art while finding out how India and its culture are revealed in artworks. Most participating artists are Israeli, some are descendants of Indian Jews, or have travelled and been in India, or are permanent Indian residents. Also included are Indians who have lived in Israel.

Works of two artists — Motti Mizrachi and Liat Livni — immediately draw attention as one goes through the exhibition. Titled as “Pioneer” and “The Goddess of Construction”, they depict creation and creativity — attributes that are worshipped in India in the form of Goddess Saraswati who represents knowledge, music, and art, and Lord Vishwakarma, the divine architect.

“Pioneer” brings out the human element — a bare torso, well-built man wearing work trousers and boots, with several hands, each holding a pick-axe while “The Goddess of Construction” is a female divine figure, again with many hands holding tools.

Agreeing with this, Lev tells India Narrative, “Motti Mizrachi’s work is also critical and cynical. Making the Zionist pioneer as an Indian God (Shiva) with many hands and ‘bigger than life’, who is destroying and recreating.” About Livni’s divine figure, he states: “The early Zionist pioneers are a kind of myth and Livni’s works reflect a sense of humour. The artist ‘replaces’ the aspects of creation and construction using the Kibbutz soil as the basis for the sculptors.”

Viewers also get a contemporary connect as they see exquisite black and white images by Tim Nachum Gidal, a pioneer of modern photojournalism, of Mahatma Gandhi and Pandit Jawaharlal Nehru. Gidal visited India in 1940, and extensively covered the 53rd Session of the Indian National Congress in Ramgarh.

When asked as to how the two curators decided on the exhibits, Lev explains: “The works are not representing India in the sense how India looks or is represented but it is about transforming and interpreting ‘Indian’ ideas and influences. This was our guideline in choosing the works.” On seeing the virtual show, you do get the feeling that both curators have done justice to their guideline.

Elaborating further, Lev adds, that all exhibits highlight the above guideline but in different ways. “Some are more direct like Dorit Lombroso photos of Bnei Menashe from Manipur and Mizoram who are immigrating to Israel. On other hand, Livni made sculptures as Indian Goddesses but as a ‘Zionist’ “building the Jewish country from the soil of a Kibbutz . Mizrachi’s ‘Pioneer’ resemble Shiva as a ‘Destroyer’ and ‘Builder’, which is a critical approach. Maya Smira combined her art and dance cerography works with strong Indian classical music and dancing influences.”

Another two artists who are bound to strike an instant chord with Indian viewers are Siona Benjamin and Jean Pierre-Weill. Benjamin’s “Find Home Series” vividly shows the influence of Indian motifs. “Benjamin through her unique art works focuses on question of identity and ‘Finding Home’ as a descendent of the ancient Bnei Israel Jewish community from India. In one respect or another, all her works involve Indian influences and Jewish symbols and sources,” informs Lev.

According to Lev, her Lilith work is based on a mystical woman figure which appears in the Kabala — the Jewish mystical literature. The blue female figure surrounded by flames, with an arrow struck to her body reminds one of Mahabharat’s Draupadi, who emerged from the sacrifcial fire.

Pierre-Weill’s series “Evolve” — watercolours on paper too have an Indian flavour. “This French-American-Israeli artist also interprets the Biblical fundamental stories of The Book of Genesis with what I call ‘new age Eastern-Indian twist’,” says Lev.

Lev’s own mixed media work “Back to the Sources (Ganga’s Source) or How I almost became a Sadhu” too has an interesting back story which he shares with India Narrative. “In 1992 I travelled extensively for few months in the source of the Ganges. I was young and I played with the idea of becoming a Sadhu. This was a very strong period, but I was young — so I took a self-portrait in one of the sources.” Lev has been to India more than 70 times and having studied Mahatma Gandhi has written the book “Soulmates”, analysing the relationship between Gandhiji and Hermann Kallenbach, his friend and supporter.

Co-curator Margalit’s mixed media works “Traces on Sand” too are stunning and eye-catching, showing different human faces on sand. It gives one the feeling that life, is ephemeral. Concurring with this observation, Lev states he “chose these works because for me it represents what I call ‘Goa Culture’, which is a unique phenomenon which has its impact also in Israel.

The show gives the viewers glimpse of how India and its culture reveals itself to different artists and how it is to open myriad interpretations depending on one’s perspective. (IANS)