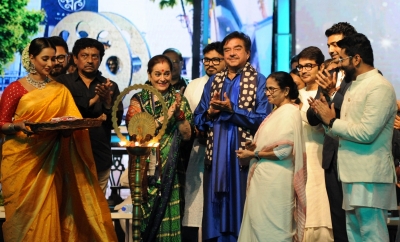 “Bengali cinema and television segment have tremendous growth potentials. So, I appeal to the potential investors to invest in these two segments,” the Chief Minister said while addressing the gathering.

She also called for some sort of arrangements between the entertainment industries in Mumbai and Kolkata. She assigned popular Bollywood star Shatrughan Sinha, who is now a Trinamool Congress Lok Sabha member, to interact with Bollywood on this count.

The Chief Minister lamented the missed opportunity to invite titans from the entertainment industry to the recently-concluded Bengal Global Business Summit (BGBS) 2022, the annual event to showcase the state as an investment destination.

“It was really a mistake on our part. From next year, the leaders from the entertainment industry will surely be invited,” Banerjee said.

She also said that the entertainment industry can immensely contribute to the development of the state’s economy. The sector, according to her, has tremendous growth potentials.

The 27th edition of Kolkata International Film Festival will go on till May 1. A total 104 films and 59 short/documentary films will be screened this time.

The Kolkata International Film Festival is the third oldest film festival in the country. It was started as an annual event way back in 1995 by the erstwhile Left Front government. (IANS)