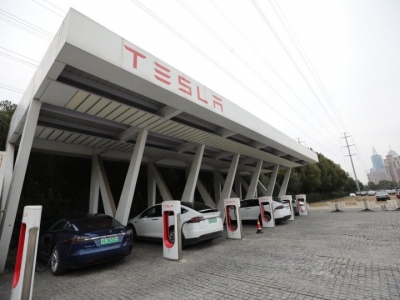 Though it will be difficult for them to overtake Tesla sales any time soon, Tesla will witness a reduction in its share across major markets, according to Counterpoint Research.

“The reason behind this is the price band in which Tesla operates. It mostly operates in the high-to-premium price band, whereas the traditional OEMs are planning to launch vehicles in the budget segment,” research associate Abhik Mukherjee said.

The rising cost of a few key raw materials and inflationary impact on production have pushed Tesla to increase its vehicle prices worldwide a couple of times.

“This might play against the sentiment of new customers, which will, in turn, affect the next quarter’s financials,” he added.

Tesla has also started deliveries to car rental service provider Hertz against its huge 100,000-vehicle order, which is also a reason for high vehicle production and delivery during the quarter.

“The urge to achieve L4 autonomy by the end of 2023 and to roll out robotaxis by early 2025 can be a major reason for Tesla’s big R&D spend. Besides, Tesla could also be conducting research on developing new battery chemistry,” Mukherjee added.

The soaring prices of some key battery components like nickel and lithium have put the auto OEMs in a spot.

“Most EV makers around the globe have been forced to raise prices by a few thousand dollars to cope with the rising prices of battery-related raw materials,” the report noted.

In 2021, China remained its top market followed by the US and Europe. Apart from vehicle sales, Tesla has a strong network of charging stations and insurance services.