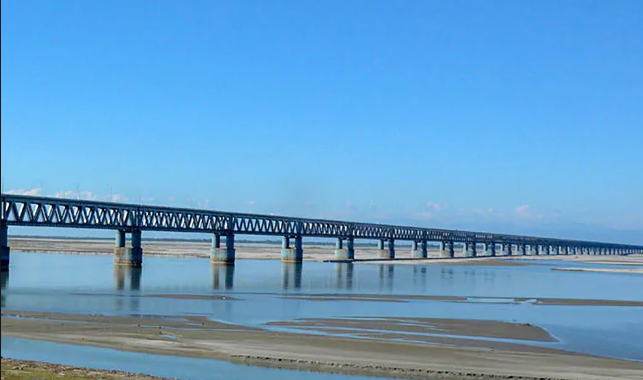 Guwahati– Prime Minister Narendra Modi on Tuesday inaugurated the country’s longest rail-cum-road bridge in Bogibeel over the Brahmaputra river in Assam. The bridge, which started in 2002, is 4.94 kilometers, or 3.07 miles, in length.

The Prime Minister arrived at the Mohanbari Airport near Dibruharh and headed to Bogibeel in a helicopter. Assam Governor Jagdish Mukhi and Chief Minister Sarbananda Sonowal received Modi at the airport.

Inaugurating the bridge that connects Dhemaji and Dibrugarh, Modi and his cavalcade took a ride, stopping in the middle and waving at thousands of people waiting on both sides.

Terming the bridge as a lifeline for the people of Assam and northeast India, the Prime Minister said the Union Government has pursued the objective of good governance in the last four-and-a-half years.

“The dedication of the historic Bogibeel rail-cum-road bridge is a symbol of good governance. This bridge is a marvel of engineering and technology, and is of immense strategic significance,” he said, adding the bridge reduces distances between Assam and Arunachal Pradesh.

“It would greatly enhance ease of living in this region,” Modi said adding that this bridge had been a dream for the people of this region for generations.

“Another five are in progress. Once completed, all these bridges would enhance connectivity between the northern and southern banks of the Brahmaputra,” he said, adding that the pace of development will transform the North-East.

Built at an estimated cost of over Rs 5,000 crore, the bridge is expected to help over five million people living in Assam and Arunachal Pradesh and significantly enhance India’s defence capability by ensuring faster movement of troops and supplies to the eastern border with China.

The Prime Minister also complimented the Assam Government for its efforts towards completing pending projects. He said almost 700 km of national highways have been completed in the four-and-a-half years.

He also mentioned several other connectivity related projects in the north-eastern region. He said a strong and progressive eastern India is the key to a strong and prosperous India.

Besides infrastructure, the Prime Minister mentioned several initiatives such as Ujjwala and Swachh Bharat Abhiyan which have seen rapid progress in Assam.

“The youth of the country, from the far-flung areas, is bringing laurels for India,” he said while referring to, Hima Das, who has now become a symbol of the self-confidence of New India.

The foundation stone for the bridge was laid by former prime minister H.D. Devegowda in 1997. The construction works started only in 2002 when Atal Bihari Vajpayee was the Prime Minister.

The bridge, situated 17 km downstream of Dibrugarh spans the Brahmaputra and connects the town in the south to Dhemaji to the river’s north.

It is located over 20 km from the Assam-Arunachal Pradesh border and is thus expected to act as an alternative to the Kolia Bhomora Setu in Tezpur. (IANS)