When on April 14, 2020 Mr. Narendra Modi, Prime Minister of India addressed the nation for the fourth time in four weeks to announce that the lockdown in the country will be extended to May 3, 2020, the decision was largely welcomed by all despite the economic hardship it entails for the country, particularly for the poor. There is national consensus that lockdown and social distancing is the only effective way to prevent the spread of the
virus and also reduce the burden on the healthcare system.

However, India’s anti corona virus strategies are not limited to the lockdown. In fact a layered multi-pronged strategy is India’s governance response to the COVID-19 pandemic.

It is noteworthy that India, a country of 1.3 billion, has been able to limit the number of deaths to 652 in the period since January 30, 2020 when the first case was detected to April 22, 2020. Reported cases in India are much lower than the global incidence rate. The pandemic has also been contained geographically with negligible “community” transmission.

The decisive Indian response was initiated much before WHO declared COVID 19 to be “Public Health Emergency of International Concern” on January 30, 2020 and before the first confirmed COVID positive case was reported, also on January 30, 2020. This was a day before Italy saw its first case on January 31. By that time, surveillance and screening of passengers had commenced in India and States had been alerted. The crisis management system had started operating at full speed.

Prime Minister Narendra Modi has led a pandemic response that is historic in its ambition and complexity. Technology and administrative methods are supplemented by the strengths of our collective consciousness and our ancient philosophy. It is a sui generis crisis management operation. The strategy leverages the deep reservoir of national resolve to confront the current challenge as one nation and one people. It is being conducted in a democratic setting. Parliament has debated this crisis extensively. The Prime Minister has also consulted and sought inputs from the entire political spectrum. In fact, this is a time when
our federal structure has stood the test of need and is an example of cooperative federalism at its best. A system-wide response is being harmonized across all of India’s 728 districts spread over 28 states and 8 union territories.

The whole country had been placed under a lockdown since March 25 for 21 days which was extended on April 14 till May 3, 2020. The lockdown which was intended to break the transmission through social distancing met with unprecedented and voluntary nationwide response. The extent of the lockdown and the compliance it has received are unique.
It was an India specific crisis response measure tailored to Indian conditions and has demonstrated results. Governments, central and states, have used this period to trace and isolate positive cases and their contacts. The graph of COVID 19 cases is flattening. As of April 21, 2020 cases are doubling in 8 days. 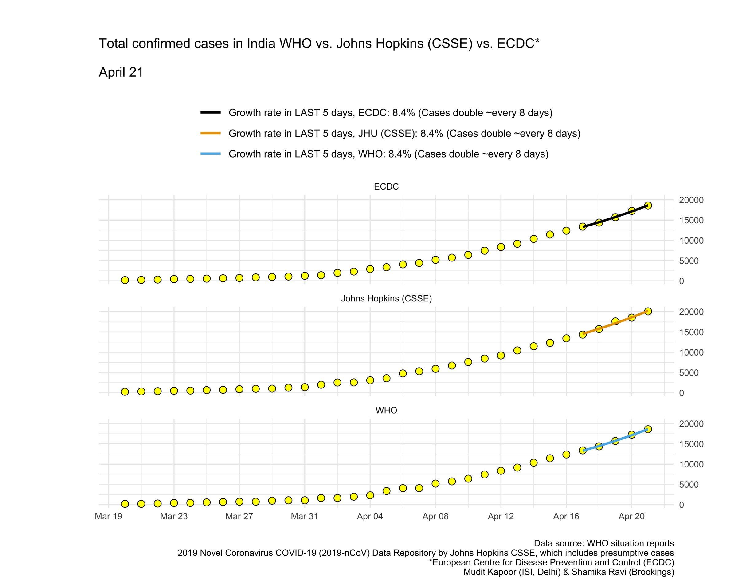 Projections of the trajectories the pandemic would have taken had there been no lockdown or only a partial lockdown are frightening as can be seen in the graph. 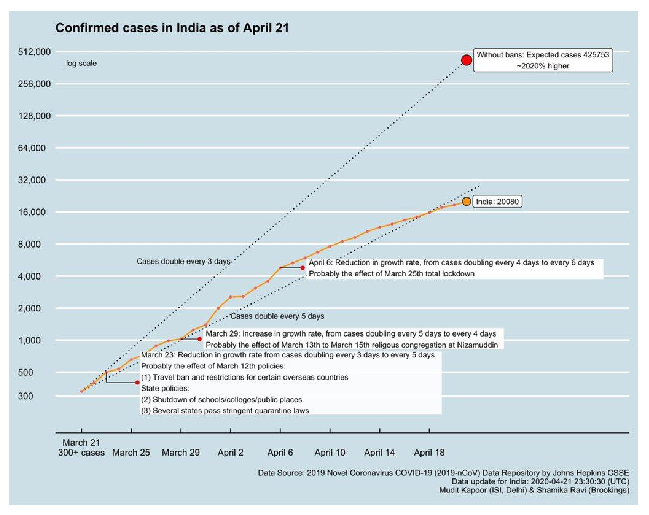 The lockdown was not the beginning but the logical continuation of a strategy. Surveillance at points of entry (airports, major and minor ports, land borders) was initiated on January 17, 2020. Visa and travel restrictions were imposed on foreign nationals on February 5. All visas were suspended on March 11 and incoming flights were suspended from March 19. Incoming passengers were placed under daily surveillance through the Integrated Disease Surveillance Program (IDSP) Network and monitored through a national online portal. The portal aggregates data and maintains a log of all community contacts of positive cases. 621,000 passengers were monitored and not a single positive case in this universe has been able to mix with the general population.

The lockdown is accompanied by a nationwide effort to enhance medical preparedness. A network of labs across the country has been set up to facilitate early and timely sample testing. 223 labs are operational. State Nodal Officers have been appointed and specific labs have been designated for States. A national Hospital preparedness effort is underway
to ensure availability of beds. Health facilities of the Defence, Labour, Railways, Home (para military forces) and other Central and State government Institutions are being enlisted to augment hospital capacity if required. Currently there are 1,71,415 isolation beds available in Govt. Sector, in addition 24,383 beds are available through other agencies. In a major innovation, Indian Railways have converted their coaches into
isolation beds. Personal Protective Equipment (PPEs), ventilators, essential drugs and other consumables are being stockpiled and buffer stocks are being constantly monitored.
A massive contact tracing operation is continuing on a nationwide scale to pre-empt transmission. A public health communication exercise has been in operation since January 2020. Social media platforms and webpages of the Government are pushing out information about basic preventive steps. TV &amp; Radio channels were mobilized and an
advertisement campaign launched.

Aarogya Setu (https://www.mygov.in/aarogya-setu-app/), a mobile app has been developed by the Government of India to connect essential health services with the people of India in our combined fight against COVID-19. The App is aimed at augmenting the initiatives of the Government particularly the Department of Health, in proactively reaching
out to and informing the users of the app regarding risks, best practices and relevant advisories pertaining to the containment of COVID-19.

As expected, the lockdown produced a number of challenges. A movement of migrant labour occurred during the initial period of the lockdown. A national effort was launched to mitigate the hardship faced by them. A detailed protocol was evolved to manage the migrants, and guidelines were issued to ensure essential supplies, rations and food packets for them. Relief camps providing food and shelter were organised on an unprecedented scale within days. This massive administrative effort across a number of states established more than 27,000 camps and shelters housing 1.25 million individuals. An additional 360,000 workers have been provided shelter by industry. 7.5 million individuals are being fed through this network of camps and shelters plus another 19,460 food camps/distribution points. The public health aspect of this movement has not been neglected and the camps have been linked to a network of quarantine facilities and testing laboratories. The nationwide response to assist these workers and their families highlighted the popular understanding of the rationale behind the lockdown.

Prime Minister’s Garib Kalyan Package (PMGKP) was launched to mitigate the hardships being faced by the poor and disadvantaged. Itattempts to create a security net particularly for the disadvantaged sections of society that are worst affected in such situations. Senior citizens, widows, the physically challenged, women, workers and others who are most vulnerable have been identified. Food supplies, cooking gas, financial support and other forms of support are being delivered on a nationwide basis. This enormous exercise involves a financial outlay of INR 170,000 crore/ USD 22 billion. Disbursal has commenced and the support is reaching those who need it the most. The management of essential services for the general population is a very high priority and is being constantly monitored.

Keeping in mind the need for having a dedicated national fund with the primary objective of dealing with any kind of emergency or distress situation, like posed by the COVID-19 pandemic, and to provide relief to the affected, a public charitable trust under the name of ‘Prime Minister’s Citizen Assistance and Relief in Emergency Situations Fund’ (PM CARES
Fund)’ has been set up. Prime Minister is the ex-officio Chairman of the PM CARES Fund and Minister of Defence, Minister of Home Affairs and Minister of Finance, Government of India are ex-officio Trustees of the Fund. The fund consists entirely of voluntary contributions from individuals/organizations and does not get any budgetary support. The fund will be utilised in meeting the objectives as stated above. PM CARES Fund
has also got exemption under the FCRA and a separate account for receiving foreign donations has been opened. This enables PM CARES Fund to accept donations and contributions from individuals and organizations based in foreign countries. Finances available from this fund will go a long way in supporting the sections of the society most affected by the Covid pandemic and the resultant lockdown. Those willing to contribute
from abroad to the fund may please do so.

This is a global pandemic and requires a global response. Prime Minister Modi has led the SAARC initiative and is also actively involved in G-20 wide coordination. The Ministry of External Affairs (MEA) has created a COVID cell and is actively coordinating the global response. It is monitoring the condition of stranded Indians on a regular basis. A global
procurement and supply chain support effort has been launched to enhance our medical preparedness.

More than 4000 requests from 63 countries/regions for medicines such as hydroxy chloroquine and paracetamol have been cleared on humanitarian grounds. It is part of India’s efforts to contribute to the global efforts to combat the Covid-19 pandemic. MEA has also coordinated inward and outward evacuations on a massive scale. It is also important to note that evacuation is possible only under very special conditions and for a limited number of people. For some countries such as the USA, evacuation is not a readily feasible option due to the large number of people involved as well as the risks posed by international travel.

The Government of India is acutely aware of the need to balance our central concern about the welfare of our citizens with our global responsibilities. India is a major source of pharmaceuticals. We are committed to acting responsibly during this crisis. There is no outright ban on exports of critical drugs and requests are being examined and responded to appropriately. The UN Secretary General has commended India’s supply of essential medicines to a large number of countries. Several consignments of critical medicines have been cleared and dispatched to the United States. Cooperation between Indian and US scientific organizations is also going ahead on how to mitigate and combat the virus. In a tragic way this crisis has brought us together and we can visualize much greater India-US strategic and economic cooperation in a post-Covid world.

Team India USA led by Ambassador Taranjit Singh Sandhu based out of India’s Embassy in Washington and Consulates in five cities including New York are actively involved in supporting the members of Indian community who are facing difficulty due to the lockdown in India and suspension of flights.

The Consulate General of India in New York has created a special facility in its Pramit web application for addressing the needs of people (www.indiainnewyork.gov.in). We have been able to assist in a wide range of situations including support for accommodation, food,
medicines and even personal counseling. We are also partnering with Community organizations such as the Indian Association of Greater Boston, Teamaid, Sewa International, Federation of Indian Associations of various states among others to provide relief and support to those in need.

As people are doing their bit by staying at home, we are doing our bit by taking our programming and events directly to their homes by innovative use of social media tools such as Facebook and Twitter. I would encourage readers to like our Facebook page (@indiainnewyork) so that they remain virtually connected while being socially distant.