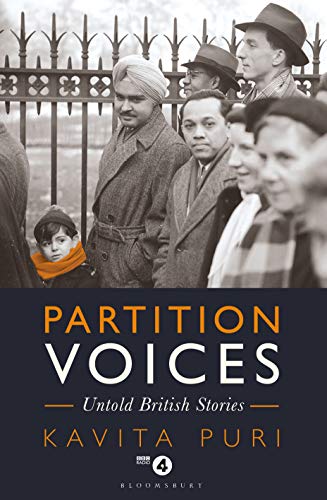 New Delhi– Hitherto, the thousands of Indians who had migrated to Britain in the wake of the partition of the sub-continent had lived in silence, perhaps wanting to bury the ghosts of the past as they sought to make a new life. Two years ago, award-winning journalist and broadcaster Kavita Puri produced a three-part series, “Partition Voices” for BBC Radio 4 that won the Royal Historical Society’s Radio and Podcast Award and its overall Public History Prize. She has now converted this into a similarly-titled book “to remember the time before separation so the next generations understand that there were Hindus in Lahore, and Muslims in Amritsar”.

“Hindus who tied rakhis on the wrist of their Muslim brothers, and Muslims who brought laddoos to their Hindu friends to celebrate Diwali. Friends and strangers who transcended hatred to commit acts of kindness and humanity during the worst of times.

“It cannot just be the stories of hate and violence which are passed down. Even though every story told to me was shattering. I felt hopeful. Hopeful that people wanted these stories of compassion to be recognised, and that the visceral pull of the place of your birth, and that of your ancestors – the love of your land – remains so strong. Hopeful that these are the stories that will survive too,” Puri writes in “Partition Voices” (Bloomsbury/pp 2832/Rs 499).

To this end, London-based journalist Poonam Joshi in her book “Arms to Fight, Arms to Protest: Women Speak Out About Conflict” has this quote from her mother, Nirmal, who fled her home in Punjab and ended up in England:

“Partition can be summarised in great detail or in one sentence. But I still feel great distress that what happened shouldn’t have happened. I think we should talk. We should talk about it very openly – we should know what happened at that time. And there is no distress in talking about that. It did not happen to one or two people. It happened on a large-scale… it became a part of history… and it is no crime to be a refugee.”

A similar strain runs through the 23 chapters of the book, divided into three parts – End of Empire, Partition and Legacy.

Take the story of Gurbaksh Garcha, “smartly dressed in a Nehru waistcoat”, exuding gentleness and calm, “a calm that must have been tested many times during his time as Mayor of Lewisham, navigating the local politics”.

“Gurbaksh’s home was in a picturesque village amid the fertile plains of the Punjab… It was a harmonious and tight-knot community. Religious difference was barely thought about. They never imagined one day they would separate from each other,” Puri writes.

“Just before partition, Gurbaksh noticed posters going up around the village inciting bloodshed against the Muslims his family had lived alongside for decades. They said that anyone demanding India should be split to create Pakistan would ‘get kabristan’.”

And then the mayhem started – and he too fled, to land up in England in 1958.

“But this story is not one Gurbaksh has ever talked of. It is too painful to recount. His children never asked. And anyway, he did not want to expose them to things he had witnessed.

“He is still angry at the way and manner of the British withdrawal. Gurbaksh calls himself an agnostic Sikh. He feels his faith in humanity has been shaken, that human beings are fragile. How little it takes to turn them into beasts,” Puri writes.

But then, it’s not only the migrants who feel the pain. There is, for instance, the reverend Canon Michael Roden from Hitchin (now Canon Chancellor of Bristol Cathedral).

“In his church, by the pews…stands a modest memorial. It shows a map of British India with a red line marking the 1947 division. A single A4 typed sheet of paper on a music stand explains that, in the absence of a national memorial, this makeshift one, in his fourteenth-century church, will act as a surrogate to commemorate the millions who died and were displaced. Around the sign, candles are lit in remembrance,” Puri writes.

At the end, the sentence reads: “We have screened the most beautiful part of this church to symbolize terrible loss of life, loss of mutual trust and loss of access to holy sites at the time of partition.”

“The partition generation remembers a time which was not always perfect, but when people lived alongside one another, celebrated each other’s festivals, were part of one another’s happiness and sorrows. They shared culture, food, language and traditions. A time before division, borders, partition. That is what they choose to remember too, after seventy long years,” Puri concludes. (IANS)