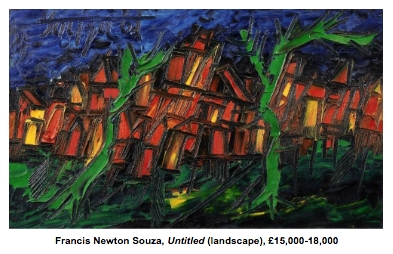 London– Rising interest in Indian art in recent years has increased the awareness about the country’s modern art and artists. This is evident from Bonhams’ “Modern and Contemporary South Asian Art sale” here on May 27 featuring the greatest Indian innovators like F.N. Souza, M.F. Husain, Nalini Malani, Sakti Burman and Zarina Hashmi.

Romanticised, idyllic pastoral scenes by Sailoz Mookherjea and M.F. Husain will be offered along with more conventionally modernist works by F.N. Souza and S.H. Raza.

The famed critic John Berger described him as an artist who “straddles many traditions but serves none. His relentless creative force is very much apparent in this landscape, which depicts a frenzied and foreboding world.”

“Souza brings a sense of macabre, black comedy to his work” said Tahmina Ghaffar who is the head of sale for the May 27 event.

“This piece is a wonderful example of the wild and farcical phase he went through during the early sixties,” she added.

The sale includes works by New York-based Indian artist Zarina Hashmi, who is well-known for her versatility in the medium and her abstract, minimal style.

She was one of the five artists selected to be in India’s first entry to the Venice Biennale, and has had retrospectives at the Hammer Museum, the Art Institute of Chicago and New York’s Guggenheim.

“This rare sculpture, one of the two lots on offer by Hashmi at the sale, is a wonderfully minimalist commentary on the movement of people and the search for an identity beyond mere national border,” said Ghaffar.

Well-known for her video art and installations, Nalini Malani’s work at the sale will be a visceral and vibrant oil painting.

In 2013, Malani became the first Asian woman to receive Japan’s prestigious Arts and Culture Fukuoka Prize for her consistent focus on such daring contemporary and universal themes as religious conflict, war, oppression of women and environmental destruction.

In October 2017,she will be the first Indian artist to get a retrospective at the Centre Pompidou in Paris.

Other sale highlights are works from the Bengal School, including by Sudhir Khastgir and Ramkinkar Baij, demonstrating the early influence of East Asian wash techniques and the emerging pan-Asian aesthetic.

The influence of these early artists feeds into the contemporary pieces in the sale by Bikash Bhattacharjee and Sakti Burman.

“Bonhams is always looking for previously undervalued artists to bring them to light and to give them the attention they deserve,” said Ghaffar.

“The sale features a number of works fresh to the market from esteemed private collections in Europe and the US, catering to the growing sophistication of Indian art collectors,” she said, adding: “we’re confident that we will continue our trajectory of success in the Indian art market”. (IANS)