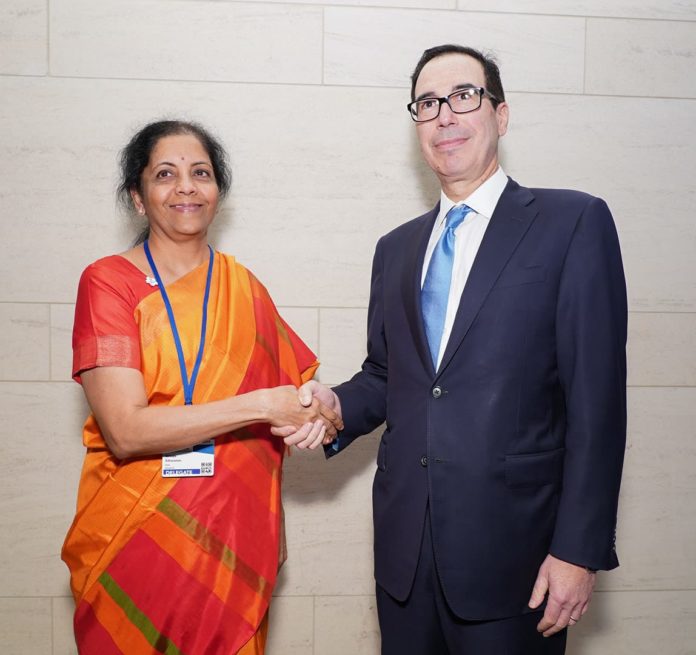 On the side-lines of the Annual Meetings, she also attended the Finance Ministers and Central Bank Governors meetings of the G20 and the BRICS. She took this opportunity to also interact with industrial and institutional investors in New York and in Washington DC and hold bilateral meetings with Finance Ministers of some countries and others. There were 30 meetings of the World Bank/ IMF/ G20/ BRICS, investors and bilateral meetings.

Investor meetings and other speaking engagements
• In the New York leg of her programme, on the first day (Oct 15), she met Prof. Jagdish Bhagwati and exchanged views on a wide range of issues, including the economy. She had the occasion to address an enlightened audience at the Columbia University. She was invited to speak on ‘Indian Economy: Prospects and Challenges’, which was moderated by Prof. Arvind Panagariya.
• On Oct 16 in New York, she met institutional investors over breakfast at a round-table organized by USISPF and FICCI, in collaboration with Bank of America. Later in the evening in Washington DC, she attended a global investors meet organized by FICCI and USISPF. There she mentioned that investors can find no better place in the world than India that has a democracy-loving and investor-respecting government. India is one of the fastest growing economies today. It has the best-skilled manpower and a government that is continuously doing what is required in terms of reforms, and above them rule of law, independent judiciary and vibrant press.
• On Oct 17, she first met up with representatives of the US Industry brought together at a round table organized by the USIBC and CII. She discussed issues of interest to the US investors. In the evening, she met a group of Economists at the Indian Embassy. It was a healthy exchange of views about the state of the global economy in general, and the Indian economy in particular.

G20 and BRICS meetings
• FM led Indian delegation for both these meetings, held on Oct 17 and 18. The focus of discussions in the G20 Working Dinner on Oct 17 was on the current challenges to the global economy and possible responses to mitigate them. She emphasized that the G20 has the responsibility to navigate the global policy co-ordination in effective fashion by identifying and taking strong measures for building buffers and catalysing a second wave of reforms. FM gave a clarion call for “concerted action” in the face of global slowdown. She also highlighted that the emerging market economies, in particular, face the challenge of achieving economic growth and inclusive development while pursuing sustainable financing. In this context, she emphasized the importance of countries pursuing structural reform measures to counter the growth slowdown. The structural reform measures undertaken by India was highlighted, particularly, the recent measures such as reduction of corporate tax. It was also indicated that India has reduced the base corporate income tax rate from 30% to 22% (and 15% for new manufacturing companies) thereby making India one of the lowest corporate tax imposing countries in the world today. This will spur investment. Alongside the corporate tax reform, Government of India’s measures pertaining to Aaadhaar based direct benefit transfer as well as Universal Health Care policy received special mention. In conclusion, she re-emphasized the need for G20 to ensure collective action so as to enable global growth to regain pace.

• FM led the Indian delegation to the G20 Finance Ministers and Central Bank Governors meeting on Oct 18 in which, the deliberations centred on international taxation and Stablecoins. The Ministers and Governors also received updates from the G20 Deputies on Quality Infrastructure Investment, Debt Sustainability, Financing for Universal Health Care and Building Effective Country Platforms, and from the Africa Advisory Group on the Compact with Africa (CwA) initiative. On the discussions at the session regarding the work underway on developing a consensus solution on tax challenges arising from digitalization, she stated that a unified approach to the nexus and profit allocation challenges is a promising one that merits serious attention. A solution that is simple to implement, simple to administer and simple to comply with was needed.

• In the BRICS FMCBG meeting on Oct 17, which FM also attended, the agenda included those pertaining to New Development Bank (such as membership expansion and enhancing the effectiveness of the utilization of the NDB’s Project Preparation Facility); developing the way forward on IMF resources as well as formulating a consensus co-operation on Authorized Economic Operators Programme. On NDB issues, she emphasized India’s strong support for NDB’s membership expansion, under Governor’s direction, and encouraged NDB Management to continue the good progress achieved on this issue till date. As far as improving the effectiveness of the Project Preparation Facility is concerned, she indicated that sustainable recovery mechanisms need to be inbuilt into the PPF guidelines so that the assistance extended is recovered once the project loan is sanctioned. Regarding the IMF resources issue, FM expressed India’s deep regret on the lack of progress of the 15th General Review of Quotas (15th GRQ). With reference to the alternative proposal emerging at the current juncture with reference to strengthening borrowed resources of IMF, she expressed a word of caution and indicated that borrowed resources cannot provide full confidence in extreme crisis situations as creditor nations themselves may be in stress. She expressed expected completion of 16th GRQ in a timely fashion.

Meetings of the IMF and the World Bank
• FM led the Indian delegation to the Annual Meetings Plenary session of the International Monetary Fund (IMF) and the World Bank Group held on Oct 18, 2019. She attended the two session of the Development Committee (DC), the ministerial-level committee of the IMF and the World Bank. In the DC Lunch Session on Oct 18, the members discussed about the global economic outlook. She mentioned that trade wars and protectionism have generated uncertainties that will ultimately impact flow of capital, goods and services. FM exhorted the community of nation towards “concerted action”. There is need to strengthen the spirit of multilaterism and develop a new paradigm of global cooperation. FM further added that the increased trade integration, geopolitical uncertainties, and high accumulated debt levels necessitate strong global coordination and that we need not wait for the slowdown to become a crisis. In the DC Plenary Session on Oct 19, she mentioned three key issues: (i) in pursuing investment led growth, we should not neglect sustainability, efficiency and transparency in debt and tax policies; (ii) investments must generate domestic revenues that can be channelized into effective public spending in health, education and skilling so that youth can get jobs and benefit from the economic growth; and (iii) strong policies and good governance for inclusive growth are essential to sustain investments.

• The 40th meetings of the International Monetary and Financial Committee (IMFC) of the IMF are being held at this year’s Annual Meetings. Finance Minister attended two sessions of the IMFC on Oct 19. The IMFC Restricted Breakfast session is a dialogue on policy challenges. At the IMFC Plenary Session, she stated that risks / imbalances reinforce the need to strengthen global co-operation at the multilateral level, besides governmental initiatives. IMF should provide solutions specific to important growth geographies to help alleviate the current conundrum. She reiterated Government’s disappointment on inconclusive close of 15th GRQ.

Bilateral meetings
• On the side-lines, FM had a fruitful dialogue with US Treasury Secretary Steven Mnuchin. They agreed to continue the dialogue in the first week of November, during his visit to Delhi.