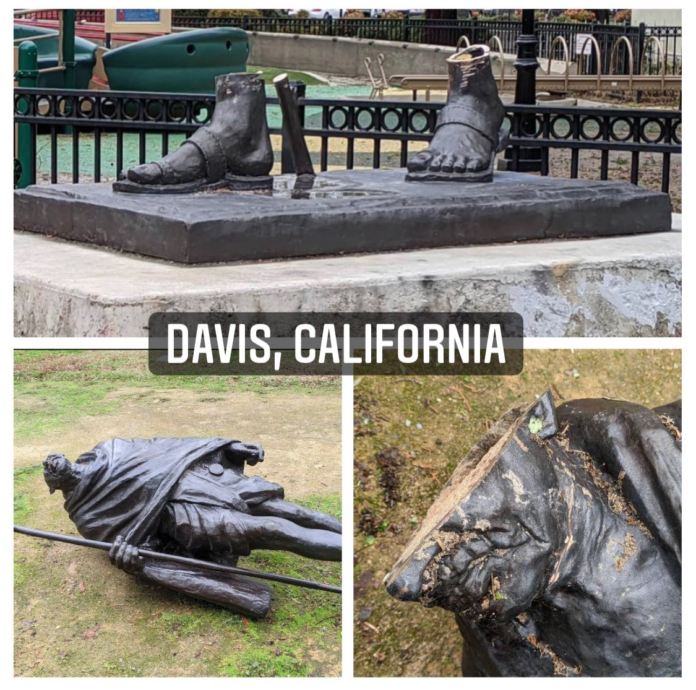 The crowd came with meaningful placards, slogans, banners, and flags of the United States and India, supporting Gandhi’s statue reinstatement. This pro statue rally and vigil was organized by the Indian Association of Sacramento (IAS) and supported organizations in and around Davis.

On Jan. 26, some anti-social elements vandalized the Mahatma Gandhi statue in the City of Davis. The statue in Davis’ Central Park of Mohandas Karamchand Gandhi, the independence leader and father of India, was found vandalized on the grass next to its plinth. 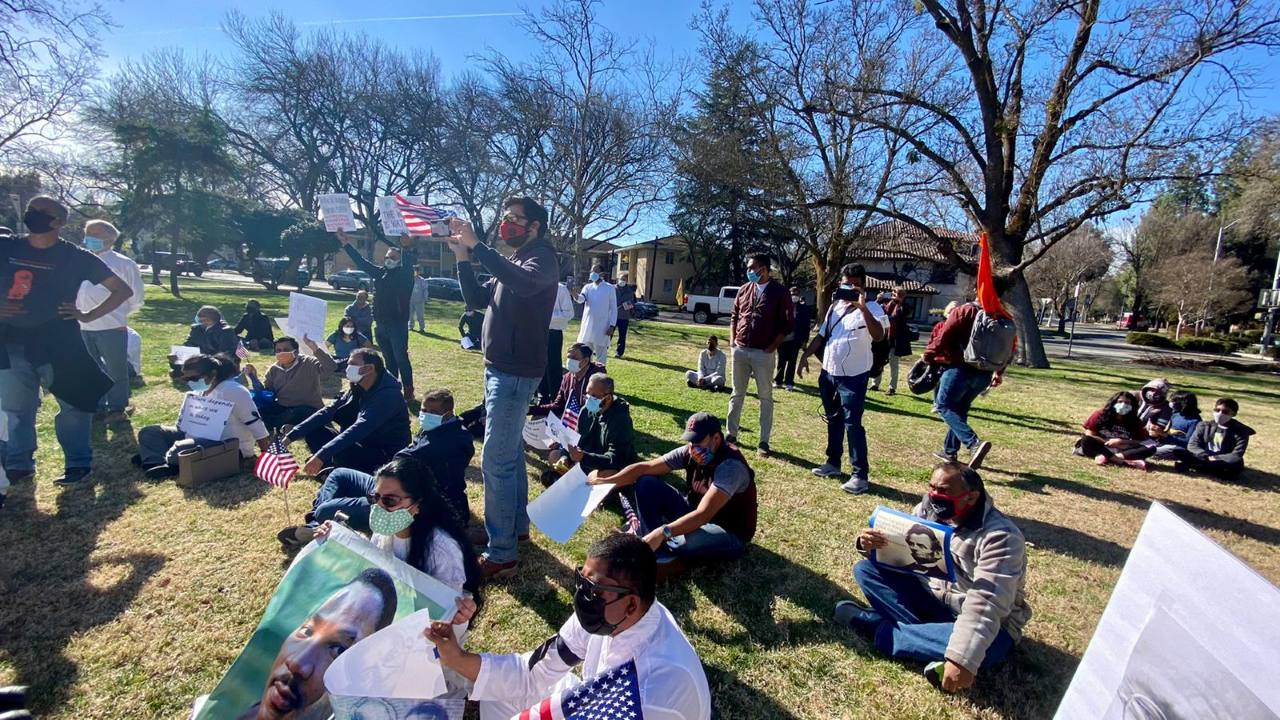 The participants were from regions including but not limited to Davis, Sacramento, Greater Sacramento, and Bay Area. The rally started by singing the national anthem of US. The cars were decorated with posters showing their support for the Mahatma Gandhi statue. 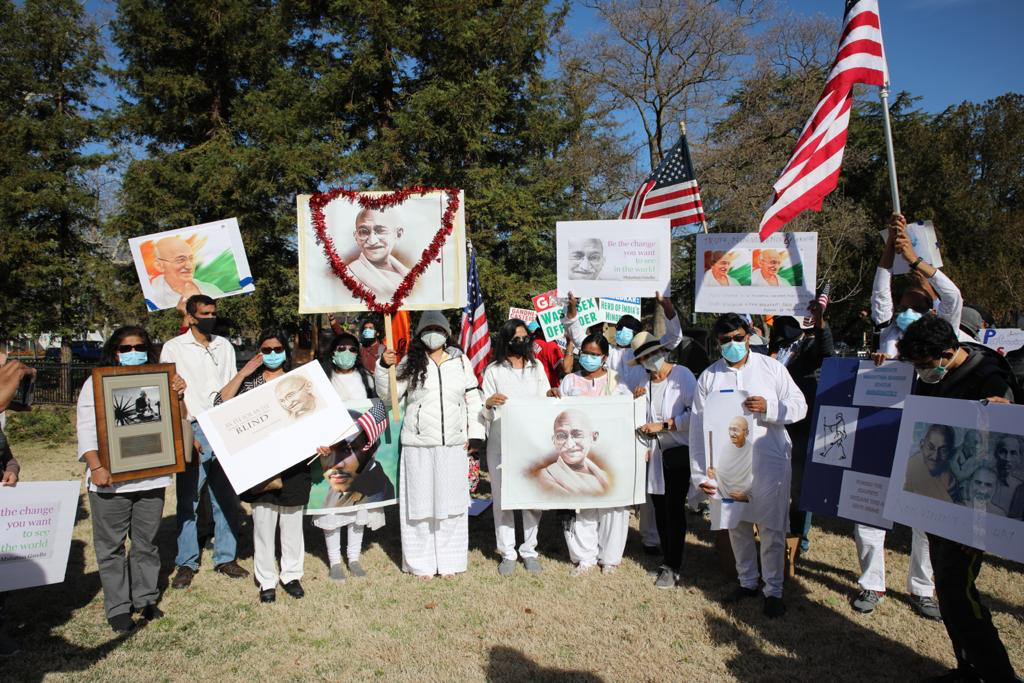 The Government of India and the City of Davis have both denounced the vandalism of the Mahatma Gandhi statue. In a statement released by the Indian government’s Ministry of External Affairs said “it strongly condemns this malicious and despicable act against a universally respected icon of peace and justice” and has called upon the U.S. Department of State to investigate the incident.

The White House condemned the recent vandalism of a Mahatma Gandhi statue in California’s Davis, said Press Secretary Jen Psaki on Monday. “We would certainly have concerns about the desecration of monuments of (Mahatma) Gandhi. We would condemn the desecration and watch it closely.”

The City of Davis issued a statement on the matter that “The City of Davis condemns the vandalism that destroyed the statue of Mahatma Gandhi in Central Park. We do not support any actions that include the destruction of property. We sympathize with those who are grieving the destruction of the statue and promise a thorough investigation and full accountability for those who committed this crime”.

“We condemn this cowardly desecration and call upon the Department of Homeland Security and FBI to investigate this hate crime, as it was likely done with the intention of intimidating the community,” said HAF California Advocacy Director Easan Katir.

“In California, Davis is a mega college-town dominated by bright students and scholars. Such sudden insurrection and vandalizing statue of national importance is quite disturbing, highly unacceptable especially during these unprecedented times. We want perpetrators of this criminal act to be brought to justice,” said Vikram Rao, President of Student Association at UC Davis.

Representatives from UC Davis Indian Community said “India has been showing peace and unity in diversity for thousands of years, and this is not changing. Most people of all religions are living harmoniously even now. Just some vested interests are trying to create confusion among certain people in the USA and parts of the rest of the World misbeliefs about Gandhi, and are instigating people to indulge in violent responses such as damaging of public properties such as Gandhi’s statue at Davis and trying to bring bad reputation to the Indian Community who are in believers of Gandhi’s values and a peace mission.”

The 6-foot-tall, 950-pound bronze Gandhi’s statue was gifted in 2016 to the City of Davis by the Government of India. After a public comment period, the David City Council voted 3-2 to move ahead and install the statue.

“It’s a symbol of peace,” Councilwoman Rochelle Swanson said at that time. An unveiling ceremony was held on Oct. 2, 2016, Gandhi’s birthday, which is commemorated each year as an International Day of Nonviolence. Since then, the statue has been a target of repeated protests and vandalism. Sham Goyal, a retired UC Davis professor who has lived in Davis for 52 years, is the man behind the installation of the Gandhi statue. In the vigil event, several aggressive young members appeared arguing with 70 plus-year-old Goyal. The members from statue opposing members kept shouting against Gandhi, India, accusing Indian Media, and kept shouting at the pro Statue vigil group and guest speakers and often disrupting their planned media speeches using their handheld megaphones and bells.