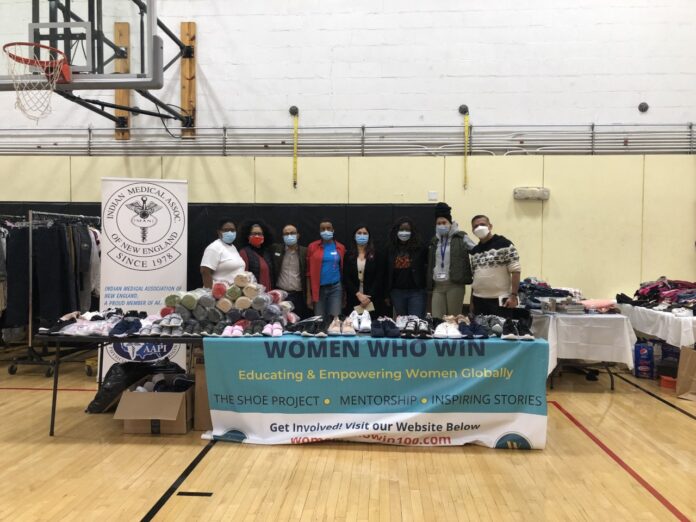 BOSTON— Women Who Win, a Boston-based non-profit organization, donated more than 300 pairs of shoes to Haitian refugees and women’s shelters in Greater Boston, the non-profit group said in a statement.

The organization partnered with several companies and organizations, including Hoka Apparel to ensure that high-quality, podiatrist approved shoes are provided to the needy, especially Haitain refugees who have faced a significant plight, and there are hundreds of them across Massachusetts.

The Women Who Win team joined the Gift of Gratitude project on December 19th, an event where they provided vaccine clinics, and other basic essentials like blankets to Haitians in need.

“We led a shoe donation drive at the event with the Indian Medical Association of New England (IMANE), and were able to donate over 150 shoes to these refugees,” the statement said.

The First Haitian-American City Councilor of Boston Ruthzee Louijeane stated, “It was really wonderful to see communities coming together to support our immigrants. We are in a difficult season right now that really asks us to look out for each other.”

The organization also organized donations with the St Patricks Shelter in Somerville, Massachusetts, and at the Forever Young Adult Day Care in Hyde Park. Residents at the shelter often work 2 jobs a day to make ends meet, in worn-out shoes putting their feet at risk and discomfort.

“The women were elated to receive a new pair of shoes for the new year, and felt empowered and equipped in their new footwear. The thrill of a new pair of shoes is one we can all relate too, and we were excited to provide this feeling to over 150 women across these shelters,” the statement said.

“This project is very close to my heart as it ties in my profession and my Indian roots to create an immense impact in the daily lives of hundreds of people by preventing limb threatening foot infections,” said Women Who Win Cofounder Dr. Deepa Jhaveri, a podiatrist. “This project has also created a buzz in the podiatry community, particularly with Indian-American podiatrists as well as major footwear companies who have offered tremendous support for this initiative.”