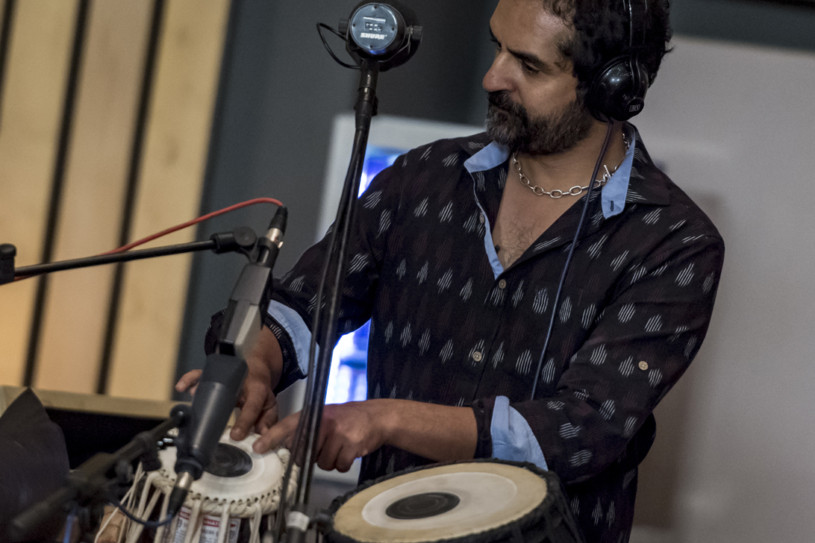 CAMBRIDGE, MA—Indian-American drummer, tabla player and DJ/Producer Karsh Kale will perform live on Thursday, March 1, 2018, at OBERON in Cambridge, MA. He will be joined by fellow musicians Max ZT and Jay Gandhi.

When Kale performed at the White House in 2013 for an Asian American Heritage Month event where he represented his Indian and American culture, then President Barack Obama said: “Karsh Kale mixes eclectic beats with the sounds of his heritage to make a sound that is distinctly his own.”

Kale is described by Billboard Magazine as a “visionary composer and producer.”

No software can replace chemistry between musicians

Kale’s music career has gone through many roles over the past twenty years as he jumps between being a tabla player, drummer, DJ, remix artist, vocalist, multi -instrumentalist, film composer, and producer as well as being a full time band leader. He has self-produced five internationally released solo albums for Six Degrees Records (Realize, Liberation, Broken English, Cinema, Up), and a collaborative album with Anoushka Shankar called “Breathing Under Water.”

Kale has developed a reputation as a genre bending collaborator which has led him to work with some of the most renowned artists from around the globe including his musical hero Zakir Hussain, Ravi Shankar, Herbie Hancock, Sting, Anoushka Shankar, Lenny Kravitz, Bill Laswell, Norah Jones, Alicia Keys, Sound Tribe Sector 9, Chebi Sabbah, DJ Logic, Bernie Worrell, Midival Punditz, and many others.

For his Boston area return to OBERON on Thursday, March 1 2018, Kale will perform live on tabla and also DJ. He will be accompanied by New York City based musicians Max ZT on santoor (dulcimer) and Jay Gandhi on Indian bansuri (flute).

OBERON is the American Repertory Theater’s second stage, a destination for theater and nightlife on the fringe of Harvard Square. In addition to offering work from the A.R.T’s main season, OBERON is also a thriving incubator for emerging artists to imagine new projects that could only exist in this exciting club theater environment. Hundreds of artists and performance groups brought work to the space each year.