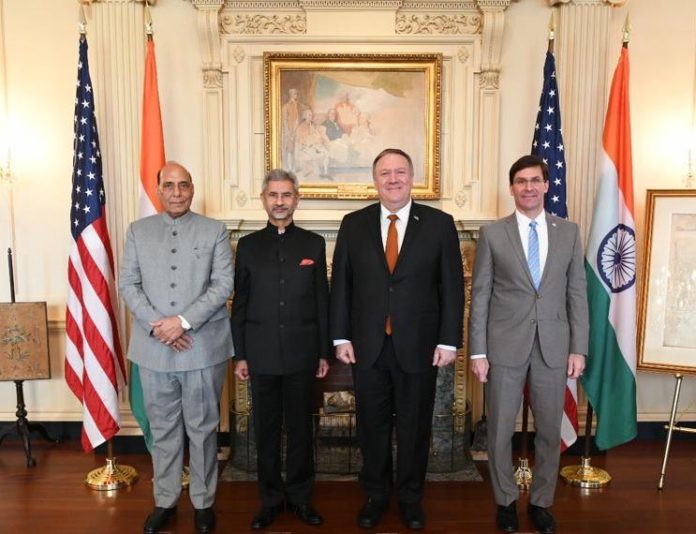 New York–The India-US relationship on counterterrorism, “especially cross border terror emanating from the territory under Pakistan’s control” has deepened, according to a senior US State Department official.

“We consistently speak to India and work closely together with India on issues related to counterterrorism; it’s, again, I think one of the key areas in which our relationship has deepened,” the official said on Thursday during a background briefing on the second edition of the India-US 2+2 Strategic Dialogue in Washington.

India’s Defence Minister Rajnath Singh and Minister of External Affairs S. Jaishankar participated in the high-level meeting on Wednesday with US Secretary of State Michael Pompeo and Secretary of Defense Mark Esper.

Citing the “pretty clear language” in the 2+2 joint statement, the official underlined the key role that the Financial Action Task Force (FATF), which combats terrorism funding, plays “with regard to Pakistan.”

The joint statement also calls out the terrorist role of “al-Qaeda, ISIS/Daesh, Lashkar e-Tayyiba, Jaish-e-Mohammad (JeM), Haqqani Network, Hizb-ul Mujahideen, TTP and D-Company” and asks Pakistan to “take immediate, sustained and irreversible action to ensure that no territory under its control is used for terrorism against other countries in any manner, and to arrest and prosecute the perpetrators of cross-border terrorist attacks, including 26/11 Mumbai and Pathankot.”

“We also welcome the fact that India has passed legislation that allows for designations of individuals (as sanctionable terrorists), and India for its part welcomed and appreciated US support in the UN’s designation of Masood Azhara, the official said.

Azhar is the leader of Jaish-e-Mohammed (JeM), which carried out a suicide bombing in February killing 40 members of the security forces in Kashmir.

Calling the 2+2 meetings format “a special one reserved for our closest partners” the official characterised India-US relationship as one of “crucial importance to the United States, the Indo-Pacific region, and the world.”

The US is headlining “regional cooperation, defense cooperation, and people-to-people ties” as the three pillars of the advances made during the 2+2 dialogue – the frist in New Delhi last year.

Asked if the US would issue sanctions against India if it gets the Russian-made Triumf S-400 anti-missile defense system, the official said that decision would be made when the US “deems that a significant transaction has taken place.”

Last month India paid an advance of $800 million for the system estimated to cost about $5 billion.

“It’s an issue on which we continue to have high-level conversation with the Indians and, again, we continue to deliver a message that I think is consistent and clear,” the official said.

“Our encouragement to India is that it should refrain from procuring the S-400 system,” the official added.

The official said that the two countries continued to have regular high-level discussions on Iran. “We’re eager for India and other countries really to join us in this maximum pressure campaign and in trying to constrain and constrict Iran’s nefarious and malign behaviour in the world.”

However, when asked about India’s Chabahar project in Iran near the Afghan border, the official said, “We decided to adopt a narrow exemption of sanctions related to Iran to promote Afghanistan’s development.”

“That decision was made in the context of being able to support Afghanistan’s reconstruction and development, to be able to allow for humanitarian and other supplies to reach Afghanistan more efficiently, and to allow Afghanistan to be able to export products and ultimately integrate with the regional and global economy,” the official added.

The official also reiterated US support for India getting a permanent seat in the United Nations Security Council and a membership in the Nuclear Suppliers Group that controls nuclear exports. (IANS)