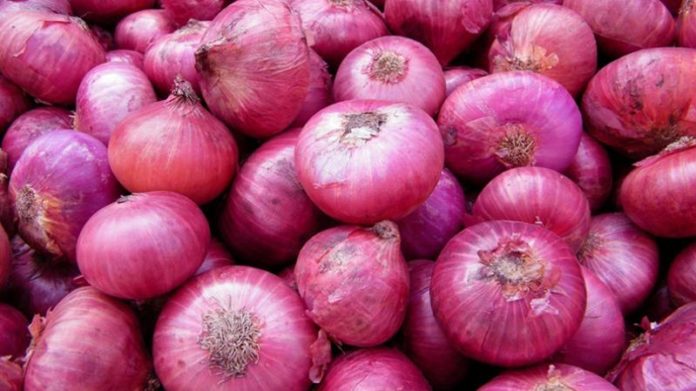 New Delhi– Onion prices have fallen across the country after the staple’s imports increased recently. However, the imported onions are not being liked by consumers as they believe the onions from foreign countries taste different from homegrown onions.

Onions are being imported from Turkey, Egypt and other countries due to the scarcity. Private traders have been importing onions from Afghanistan for a long time.

Traders believe that the colour of onions imported from Turkey is different from homegrown onions. Moreover, Turkey’s onion with thick peels is not being liked by the customers, as they feel that it tastes different from Nashik’s onions.

Savita Bharti, a resident of Delhi’s Shakarpur, said that the taste of “desi” onions is different from onions from foreign countries.

“The yellow-coloured onions available in the market are cheaper, but it’s not tasty. Onion enhances the flavour of dishes, but the foreign onions don’t provide the flavour that desi onions offer,” Bharti said.

Rajendra Sharma, an onion trader and President of the Onion Merchant Association at Delhi’s Azadpur Mandi, said, “At present, onions from Afghanistan, Turkey and Egypt are available in the market, but the customers prefer to buy the yellow-coloured onion as it’s cheaper.”

Another onion trader from Azadpur Mandi said, “Onions from Nashik are liked by customers the most across the country. However, due to heavy rains in Maharashtra during the late monsoon season this year, the crops suffered heavy losses, causing the staple’s scarcity.

To increase the availability of onions across the country, the central government has decided to import 1.2 lakh tonnes of onions, of which import deals of 42,500 tonnes of onions have been made so far, and 12,000 tonnes are expected to arrive by December 31.

The Union Ministry of Consumer Affairs, Food and Public Distribution said on Thursday that MMTC has signed a new contract to import another 12,500 tonnes of onions from Turkey. (IANS)