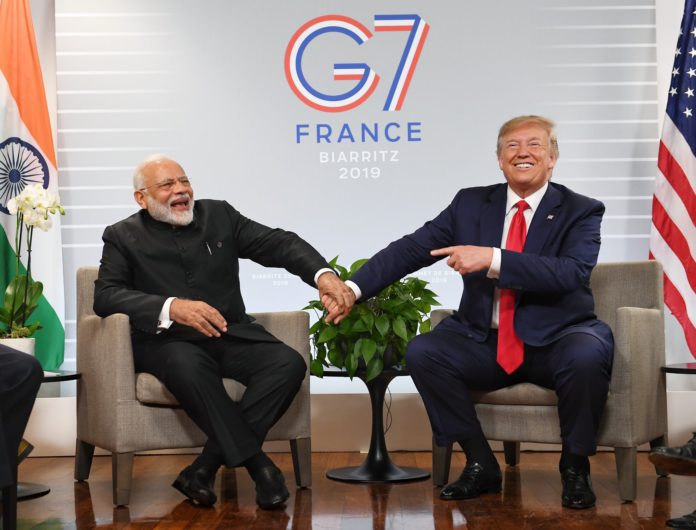 Biarritz, France– With Prime Minister Narendra Modi declaring firmly that India does not want any third party to mediate on the Kashmir issue, US President Donald Trump on Monday backed down on his offer to mediate, saying India and Pakistan “can do it by themselves”.

Answering queries from the media on Kashmir, ahead of their bilateral meeting, Prime Minister Modi, to a question on Trump’s offer to mediate on Kashmir, said: “All issues between India and Pakistan are bilateral, and we don’t want to trouble any nation over this. And I have faith… before 1947 we were one nation, and that if we sit together and discuss, we can find solutions between ourselves to our problems through dialogue.”

To a question on whether his offer to mediate was still on the table, Trump said: “Well, I am here, and I have very good relations with both gentlemen (Modi and Pakistan PM Imran Khan), and I’m here. I feel they can do it by themselves, they’ve been doing it for a long time.”

Earlier, asked if Kashmir would be discussed, Trump said he had discussed the issue with Modi during dinner on Sunday night.

“Well, we spoke last night about Kashmir, and Prime Minister Modi really feels that he has it under control; and now when they speak with Pakistan and I’m sure that they will be able to do somethng that will be very good.”

PM Modi, asked about his take on Kashmir, said: “India and Pakistan have several bilateral issues. After the election of Prime Minister Imran Khan, I told him that both our countries suffer from the problems of poverty, illiteracy, backwardness and both should work together for the betterment of our people. This message I gave to the Pakistan Prime Minister, and I have conveyed this to President Trump as well, and we keep discussing our bilateral issues.”

Trump’s remark that both India and Pakistan “can do it by themselves”, is a climb-down from his earlier stand, as recent as August 21 when he said he would discuss the Kashmir issue with ‘friend’ Modi in Biarritz and do his best to mediate in the issue.

Trump had said in the White House on that day: “…I’m going to meet Prime Minister Modi, I will be with PM Modi over the weekend, in France.

“And I think we’re helping the situation, but there’s tremendous problems between the two countries. And I will do the best I can to mediate or do something,” he had said.

Trump had also last week called up both Modi and Pakistan Prime Minister Imran Khan on the Kashmir issue, during which Modi had conveyed that “extreme rhetoric and incitement to anti-India violence by certain leaders in the region was not conducive to peace”, in a reference to the Pakistani leadership spewing anti-India venom over the Kashmir issue.

Trump’s backing off is an iteration of the US’ official stand that Kashmir is a bilateral issue between India and Pakistan.

Earlier, before they opened the floor to questions, Trump said of Modi: “It’s great to be with PM Modi of India, incredible country, and incredible man. He’s had a tremendous election victory, he’s really a man who is loved in his country. We’re talking about trade, we’re talking about military, we’re talking about a great many things. We’ve had some great discussions, and we were together for dinner. And I learnt a lot about India, it’s a fascinating place, beautiful place, and it’s an honour to be with you.”

Modi, in his remarks, said in Hindi: “Today my ‘mitra’ (friend), the leader of the oldest democracy, Sriman Rashtrapati’s meeting is very important. Whenever we’ve got a chance we’ve talked. India is the largest democracy, 700 million voters gave their verdict, I am very honoured that he called up and congratulated me, and today again he has congratulated me.

“India and America, both are democracies, for the good of the world. We keep having indepth discussions on these and many other issues. Financial and trade talks between India and the US are a continuous process, and in many areas we welcome the US’ suggestions, and in many areas we are trying to go forward together in tandem. The Indian diaspora is investing in a big way in the US, and the way the diaspora has been a partner in its progress, and the way they have been treated with high respect and love, I am truly grateful.” (IANS)