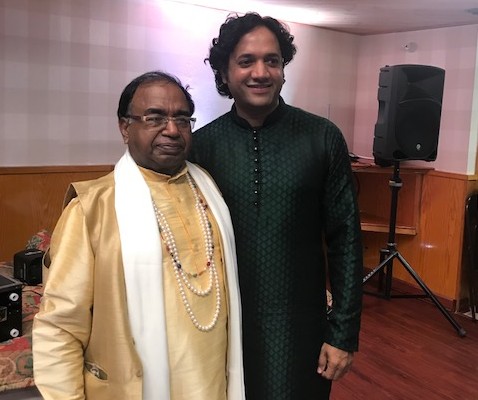 Mr. Narang hails from Jalandhar and has had the privilege of learning music first at the feet of his own father, and then Ustad Salamat Ali Khan Sahib, Ustad Shankar Lal Mishra Ji. Mr. Narang has dedicated his whole life to the teaching and learning of music and has to his credit a large number of students who have made big in India and abroad. The endless list of his students includes names such as Bollywood star Sukhwinder Singh, famous Sufi singer Hans Raj Hans, Jasbir Jassi and Sukhshinder Shinda to mention only a few.

It was a great evening dedicated to Indian Classical Music . Mr. Narang has performed several times at one of the oldest music festival Baba Harivallabh Sangeet Sammelan held every year at Jalandhar in the month of December.

“It was something of a first of its kind and something which the discerning audience will remember for long time to come,” organizers said in a statement. “Mr. Narang took them on journey across diverse ragas in his inimitable style. Each of his renderings was received with rapt attention and applause. This was an entertaining quest for classical music.”

Mr. Narang entertained a select group of music lovers of New England at an event rightly named “सुरों भरी  शाम “ at Attleboro Motor Inn hall in Attleboro, MA. The event was attended by about 150 receptive, responsive and  appreciative music lovers who enjoyed every moment of the performance . There were many moments when the audience was significantly mesmerised clapping to the rhythm and was giving enthusiastic ovation and adulation.

Accompanying Mr. Narang was Nitin Mitta the renowned percussionist of North America . The duo of Narang and Mitta provided a rare treat to the New England audience.

Mr. Narang initiated the evening with प्यार नहीं है सुर से जिस को वो मूर्ख इंसान नहीं है … While explaining and demonstrating variety of ragas Mr. Narang led the audience into light ghazal which thrilled one and all and afforded them a rare entertainment. His performance left the audience spelling and clamoring for more and more. Mr. Mitta’s touches with his skillful hands lent a unique charm to the whole event. All the members in the audience felt that they would cherish the memories of this evening for long time to come.

Earlier introducing the event, Mr. Subhash Chander. President of India Museum Heritage Society remarked ,” It was our dream project to present Prof. Narang to the local audience . Mr. Narang is a rare music teacher and performer who has dedicated his life to music. As a matter of fact Narang eats music, breathes music, sleeps music and lives music. He is one of those whose very existence depends upon music”