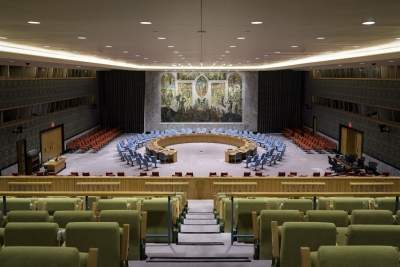 United Nations– India has been elected to the Security Council with an overwhelming majority of 184 votes running on a platform of fighting terrorism and promoting the ethos of “Vasudhaiva Kutumbakam” — the world is one family.

Wednesday’s elections took place against the backdrop of the conflict in Ladakh with China, whom it will join on the Council in January.

New Delhi won the Asia Pacific seat on the highest decision-making body of the UN with the unanimous support of the countries in the 55-member group, with China and Pakistan, at least openly, conceding support in face of overwhelming backing for India from the others.

Though India ran unopposed from Asia, eight countries apparently did not vote for India in the secret ballot in which 192 of the 193 member nations participated.

After the vote, India’s Permanent Representative T.S. Tirumurti acknowledged the said in a video statement, “We are confident in the COVID and post-COVID world, India will continue provide leadership and a new orientation for a reformed multilateral system.”

“Our election to the United Security Council is a testament to Prime Minister (Narendra) Modi’s vision and his inspiring global leadership,” he added.

India will serve its eighth two-year term as a non-permanent member without veto powers, even as it pursues on a parallel track UN reforms aimed at getting a permanent seat.

India will replace Indonesia, whose term ends at the end of the year, on the Council and join Vietnam as one of the two non-permanent Asian members.

Running unopposed for the seat for Latin American and Caribbean countries, Mexico won with 187 votes.

The ten non-permanent Security Council seats are distributed among five regional groups and elections are held every year for the five that fall vacant on alternate years.

But there were contested elections for the three other seats.

Canada was routed in its bid for one of the two seats allotted to the group made up of West European countries and others like Canada and Australia that do not fit in elsewhere.

In a setback to Prime Minister Justin Trudeau who personally campaigned hard for the seat, it received only 108 votes.

Norway with 130 votes and Ireland with 128 were elected to the two seats.

Neither Kenya nor Djibouti received a two-thirds majority and a runoff is to be held later.

Kenya, which received 113 votes for the African seat had the endorsement of the continent’s countries, while Djibouti which counted on a rift between the Arab and Non-Arab nations in the group received 78 votes.

In a last-minute pitch, Tirumurti said in a video message, “India’s presence in the Security Council will help bring to the world our ethos that the world is one family — Vasudhaiva Kutumbakam.”

In a campaign document unveiled by External Affairs Minister S. Jaishankar in New Delhi, India laid out a “5S” approach of Samman (Respect), Samvad (Dialogue), Sahyog (Cooperation) Shanti (Peace) and Samriddi (Prosperity) for its service on the Council.

The document setting out India’s agenda said that a reformed multilateralism is a must for the post-COVID19 era.

Besides fighting terrorism, a priority for India, which historically the largest contributor peacekeeping operations, that the document listed was streamlining UN peacekeeping to “ensure greater clarity, direction, and professionalism.”

While addressing the abuse of technology by terrorists, the document said that technology must be promoted with “a human touch” and India will promote partnerships to harness it to reduce human suffering and build resilient communities.

“India will become a member of the Security Council at a critical juncture,” Tirumurti said.

India will step into a Council Chamber paralysed by the polarisation of its veto-wielding permanent members that almost harks back to the Cold War era.

It will have to deftly deal with intractable issues like the Syrian civil war with international dimensions, Ukraine’s disputes with Russia, the US — or President Donald Trump’s — obsession with Iran or its fallout and Yemen where the UN has not been able to act because of the standoff between the West and Russia and China.

But at least when China tries to bring up the Kashmir issue in the Council as it has done twice recently, India will be right there.

In elections held simultaneously, Volkan Bozkir, a Turkish diplomat and politician who ran unopposed, was chosen president of the next session of the General Assembly that starts in September.

Eighteen countries that ran unopposed for as many seats on the Economic and Social Council (ECOSOC) were also elected.

India’s last term on the Security Council was in 2011-12 and Hardeep Singh Puri, who was then India’s Permanent Representative and is now a minister, immediately afterwards planned to bid for its next term not wanting a long gap like the 19 years since the previous 1991-92 tenure.

Intense diplomacy by him and his successor, Asoke Mukerji, sealed India’s bid for the 2021-22 term.

Afghanistan had initially expressed interest in running for the 2021-22 term but did not pursue it, leaving the field for India. (IANS)