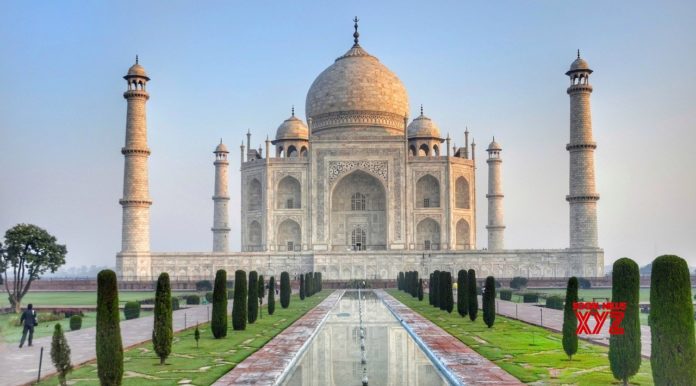 Agra–India’s global tourist destination Taj Mahal, which witnessed a daily footfall of thousands of people, now stands secluded after it was shut to the public exactly three months ago due to the COVID-19-induced lockdown.

Taj Mahal is Uttar Pradesh’s main attraction and a major source of revenue for the state’s tourism industry. According to the Archaeological Survey of India, as many as 15,000 to 20,000 foreigners and Indians used to visit the historical site daily.

Superintendent Archaeologist Dr Vasant Kumar Swarnkar told IANS that foreign tourists were charged Rs 1,300 each while domestic tourists paid Rs 250 each for the visit but the pandemic has spelt doom for historical monuments and Agra’s economy.

It is the first time that the monument has been shut after the devastating 1978 floods. It was previously closed during World War II in 1942 and the Indo-Pak war of 1971.

Mayor Navin Jain had, earlier this month, led a chorus to demand reopening of the Taj Mahal and other historical monuments in the city, without spelling out the gains when international flights were suspended.

Agra has three world heritage monuments — Taj Mahal, Agra Fort and Fatehpur Sikri — but it will have to wait a little more to see these grand structures reopen.

Sanjay Sharma, president of the Approved Guides Association, said hundreds of guides have suffered financially as tourists have not been visiting Agra since March-end.

The city, which used to be swarmed by tourists prior to the outbreak, now wears a deserted look. Tourism is the mainstay of Agra’s economy, sustaining lakhs of people working in hotels, travel business, as guides and photographers, in the emporia, ‘petha’ industry.

A big chunk of population has been hit due to COVID-19. Ramesh Wadhwa, president of Agra’s Hotel and Restaurant Owners Association, said that hotels, restaurants and travel agents suffered a loss of Rs 3,000 crore during the lockdown period.

“India’s ‘Athithi devo bhava’ is in danger of vanishing forever. Even though businesses have recently re-opened, there is no footfall. We are not expecting things to fall back in place until next year when the vaccine is made for this deadly disease,” Wadhwa said.

He said that the worst hit were the small budget hotels which were being compelled to pay all kinds of taxes, even though their earnings from tourism have been reduced to zero.

Wadhwa requested the government to waive property, water and service taxes for two years and set up a fund to support the basic salaries with direct transfer to affected employees of hotels and restaurants for 12 months.

President of Agra Tourist Welfare Chamber, Prahlad Agarwal, said that the marble industry used to earn a revenue of Rs 1,500 crore, including from exports, but has now come to a grinding halt.

The city’s ‘petha’ (a sweetmeat) industry also depends majorly on tourism and has faced massive losses amid the challenging times.

Rajeev Singhal, general secretary of the Petha Mandi Association, said that the industry employs over 50,000 people and has faced a loss of Rs 100-Rs 150 crore during the lockdown period.

The pandemic has also dealt a major blow to the Agra footwear industry. City Footwear Manufacturers and Exporters Chamber president Puran Dawar said that the shoe industry includes a total of 10,000 units and used to import and export goods worth more than Rs 5,000 crore.

However, with COVID-19 cases in India touching 3.5 lakh, normalcy looks like a distant dream. (IANS)