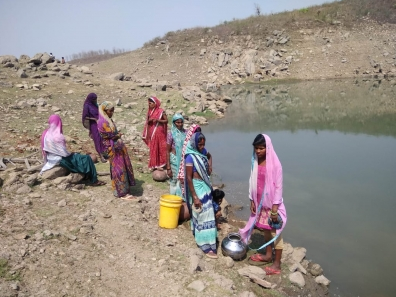 Sonbhadra– Sonbhadra district of Uttar Pradesh was in news for gold reserves, but about 10,000 villagers of 269 villages here have become disabled due to fluorosis reportedly caused by air and water pollution.

Despite the intervention of the National Green Authority (NGT), the state government or district administration has not taken any effective steps.

Some of the patients afflicted by fluorosis are Ramdhani Sharma (55), Vindhyachal Sharma (58), Salil Patel (18), Guddu (15), Sheela (20), from Nai Basti of Padrach village panchayat of Chopan development block and Sunil Gupta (35) and Usha (16) from Chilka Dad village.

Jagat Narayan Vishwakarma, an environmentalist associated with the NGO ‘Vanvasi Seva Ashram’, said, “A team of researchers from New Delhi’s Centre for Science and Environment came here in 2012 and took samples of people’s blood, nails and hair. They found that the level of mercury in the samples was high.”

Vishwakarma said, “In the month of November 2018, a camp was organised on the initiative of the Director General of Health, in which the quantity of fluoride in the people was found to be 12 milligram per litre through a urine test, which higher than the set parameters.”

“The complaint of poor air quality and fluoride in water was filed in the NGT, but the administration is not following the instructions of the NGT,” said Vishwakarma.

Advocate Ashwini Dubey, who is fighting for the rights of tribals of Sonbhadra in the Supreme Court, said, “The state government generates revenue by exploiting mineral and forest wealth from here. Local gangs are involved in the mining business, but tribals are forced to drink drain water.”

Dr Firoz Ambedin, Medical Superintendent of Community Health Centre (CHC) Myorpur, told IANS on Sunday, “This area is fluoride affected. We recommend calcium tablets to those who are suffering. Clean water and amla (gooseberry) help in recovering from the disease. The treatment of the disease has not yet been finalised.” (IANS)