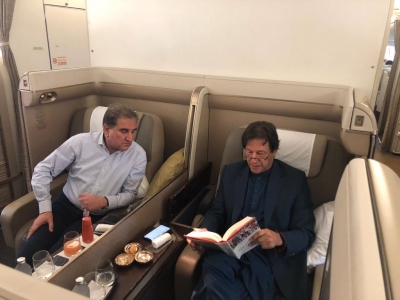 New Delhi– Pakistan Prime Minister Imran Khans shrill campaign to internationalise Kashmir has bombed after the 57-member Islamic bloc brushed aside Islamabads frenzied attempt to haul up India for abrogating Article 370 more than a year ago.

In the latest attempt to slam India for its decision to fully mainstream Kashmir with the rest of India, it was once again Pakistan’s light-headed Foreign Minister Shah Mahmood Qureshi who had an egg on his face. Qureshi was left red-faced after the Organisation of Islamic Cooperation (OIC), holding its 47th session of the Council of Foreign Ministers in Niger’s Niamey, snubbed Pakistan by making no mention of Kashmir in its agenda.

Despite the embarrasment, Qureshi, took the ‘Islamophobia’ route to mention Kashmir in his speech, another wasted exercise, as the participating ministers remained focused on session’s theme “United against Terrorism for Peace and Development”.

The OIC, through its Secretary General Yousef Al-Othaimeen, had made it aptly clear that the agenda of this year’s Council of Foreign Ministers (CFM) session would include a list of topics and “issues of concern” to the Muslim world.

“In addition to the Palestinian cause, the fight against violence, extremism and terrorism, Islamophobia and defamation of religious, the Council will discuss the situation of Muslim minorities and communities in non-member states, fundraising for the Rohingya case at the International Court of Justice (ICJ), as well as the promotion of dialogue among civilizations, cultures and religions, and other emerging matters,” the OIC, with a membership of 57 states spread over four continents, said in a statement released prior to the meeting.

The much-expected agenda though came as a huge shocker for Pakistan which had for long been demanding a special OIC meeting on Kashmir.

“The meeting has not been convened so far because the Saudis, who wield a virtual veto in the 57-member bloc of Muslim countries, has not supported Islamabad’s move. The latest omission of Kashmir from the agenda of the regular foreign ministers’ meeting comes at a time when ties between Pakistan and Saudi Arabia/UAE remain strained over what Pakistani diplomats say are ‘unfulfilled expectations’,” Pakistan’s leading daily Dawn said in a report.

Qureshi was to face more embarrassment after landing in Niger along with Sardar Masood Khan, the former Pakistani Ambassador to the UN, who is now president of Pakistan-occupied Kashmir (PoK).

The duo referred Niger as a “brotherly Islamic country” and urged the founding member of the OIC to raise the Kashmir issue at the forum of African Union (AU) and various other international platforms.

But, as the two-day session kicked off on Friday, neither Mahamadou Issoufou, President of the Republic of Niger, nor any other participating country diverted from the pre-decided agenda.

OIC Secretary General Al-Othaimeen said that the choice of the theme for the session, “United against Terrorism for Peace and Development”, is a strong reminder that “terrorism is the single most serious threat to the region and the world, given its negative impact on growth rates and cooperation ties, in addition to worsening Human Development Indices (HDI) ranking”.

He also valued the role assigned to the OIC Sawt al-Hikma (Voice of Wisdom) Center, which acts in coordination with the International Islamic Fiqh Academy to bring reason to bear and promote moderation and tolerance. (IANS)