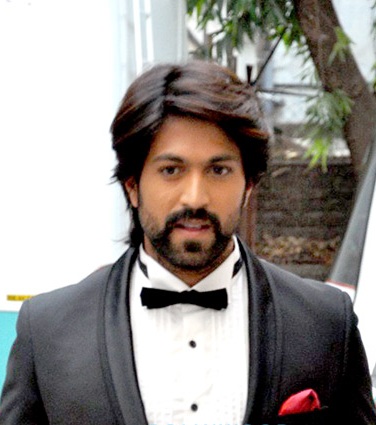 Bengaluru– Kannada film actor Yash, who will soon be seen in “KGF” – Kolar Gold Fields – that will release in five languages including Hindi, says he is quite excited to see how cine-goers across India accept him as a performer because he is a newcomer for a majority of the audiences.

“For a pan-India audience, I am a newcomer and I know that. So far, I have only worked in the Kannada entertainment industry. Though my films are dubbed in Hindi and watched by many people on TV and on online platforms, we never had a Kannada film that was released in theatres in Hindi. So there is a feeling in my mind of being a newcomer to the maximum audience,” Yash told IANS here.

Having started his career in Kannada television, Yash made his debut in cinema in 2013 with the film “Googly” and delivered some commercially successful films like “Mr and Mrs Ramachari”, “Gajakesari” and “Santhu Straight Forward”.

Elaborating on the advantage that he gets by acting in a Kannada film, he said: “In the Kannada film industry, when a film is successful, we tend to carry some element, style and dialogue to a new film just to keep our fans stay with the characteristics of an actor that they already loved.

“Since ‘KGF’ is trying to reach an audience that will be watching my performance for the first time, they won’t be having any reference point to understand my talent from my previous works. As an actor, I have to show my strength and power of performance to win the heart of my new audience.”

The film will be releasing in Tamil, Telugu, Kannada, Hindi and Malayalam languages.

While the actor believes “KGF” will be a great opportunity for the homegrown talent of Karnakata to present their work to the national audience, Yash said: “Our Kannada film industry has no dearth of talent, but we need more exposure.

“That is the sole reason for us to venture into different language release so that we can share our potential to the world. I am confident that the production value and content of our film will surely match up to the global standard.”

Set in the 1970s, the story of the film revolves around a young man named Rocky (Yash), who is born on a special day and has a desire to rule the gold mines of Mumbai city.

Asked if the Mumbai backdrop will make the story more relatable for the Bollywood audience, Yash said: “That could be an advantage because in the film we have shown the 70s’ era and how the city Mumbai used to look and feel… The colour, people, society… we tried to capture the time frame on-screen.

“Having said that, we did not do that intentionally, but organically. Back in the 1970s, 1980s, people from the southern part used to go to Mumbai to achieve their dreams. There were more job opportunities, business and money. Since the film also revolves around the gold mine, the city plays a role,” added the award-winning actor.

He grew up watching Salim-Javed’s superhit Bollywood films like “Sholay”, “Deewaar” and “Don”, and says he admires Amitabh Bachchan and Shah Rukh Khan.

Interestingly, “KGF” is releasing on the same day as Shah Rukh’s much anticipated “Zero” on December 21.

Does he have Bollywood dreams?

“I love watching Bollywood films, especially of Rajkumar Hirani. But I am not exactly desperate to work in Bollywood. I love my acting and given a good script I will work in any film industry.”