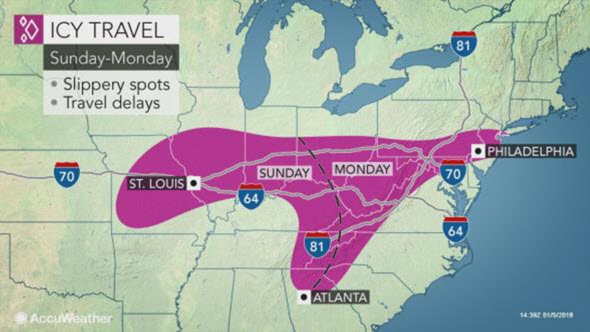 AccuWeather reports ice and some snow will accompany a weak storm and a surge of milder air into the eastern United States by early in the week.

“While heavy precipitation is not anticipated by the storm at this time, it just takes a small amount of ice to make roads and sidewalks a skating rink,” according to AccuWeather Chief Meteorologist Elliot Abrams.

The extent and severity of frigid air in recent days have made the ground quite cold. Temperatures in many locations have dipped as low as the single digits and below zero at night. It will take some time for the ground to thaw.

Even though air temperatures are forecast to approach and surpass the freezing mark in many locations early next week, moisture falling from the sky or forming on these surfaces due to condensation may freeze for a time.

The greatest risk for a period of freezing rain or drizzle in the Eastern states will extend from the southern Appalachians and Piedmont areas to the Ohio Valley, central Appalachians and the upper mid-Atlantic coast.

A mix of snow and sleet may accompany the freezing rain and drizzle for a time in part of this zone.

Plain rain is forecast for much of the South and the lower mid-Atlantic coast.

Farther north, all or mostly snow is forecast. While snowfall near and north of I-80 will generally be light and is likely to range from a coating to a couple of inches, enough snow may fall to make roads slippery.

Wintry precipitation is likely to begin along the western slopes of the Appalachians on Sunday night and will reach part of the Atlantic Seaboard as Monday progresses.

“While there is still some risk for the storm to strengthen and slow down upon reaching the Atlantic coast, the latest indications are that the steering winds will remain westerly enough to push the storm quickly out to sea on Monday night,” Abrams said.

For people who have grown tired of the cold weather or are hoping to catch a break with their heating bills, temperatures more typical of January are forecast for much of the next week.

AccuWeather’s winter forecast released in early October accurately predicted the coldest air of the season to arrive in the Northeast and mid-Atlantic in January. The outlook called for chillier winter conditions this season to translate to an above-normal snow season, highlighting the corridor from New York City to Boston to stand the best chance of abundant snowfall.