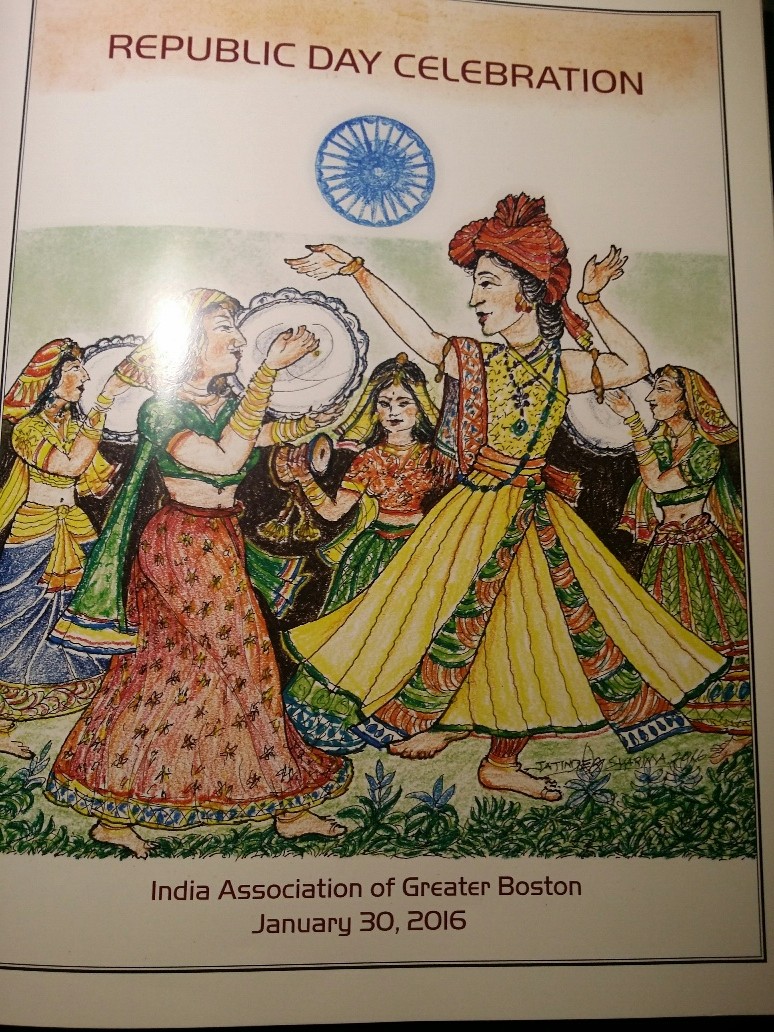 BURLINGTON, MA—India Association of Greater Boston, known as IAGB, gave a new meaning to the so-called Indian Standard Time and started its annual Republic Day program sharp at 4:00 pm as it had announced and planned. It came as surprised to many in the audience as most Indians are used to starting such events 30 minutes to one hour later than originally scheduled and advertised.

Indians and Indian-Americans from all walks of life came to the Burlington High School in Burlington, MA, on Saturday, Jan. 30, to celebrate India’s 67th Republic Day. Twenty-four teams consisting of young kinds to adults participated in the cultural program that continued for almost four hours. The Burlington High School auditorium was full with the audiences and performers. A number of vendors and non-profit organizations had set up their stalls and booths, creating a festive and mela-like atmosphere outside the auditorium.

The program opened with IAGB Vice President Praveena Naduthota welcoming the audience and national anthems of the United States and India sung by Aashna Parikh and Janani Sharma, respectively.

The event was organized by IAGB and its sister organization Saheli. Lata Rao, an IAGB director and Advisory Board member of Saheli gave an overview and accomplishments of Saheli in the South Asian community in 2015. Chief Guest of the evening was Dnyaneshwar Mulay, consul general of India, New York. Newly-elected IAGB President Jaya Voruganti introduced her executive committee.

The theme of this year’s event was “Folk Art of India” that featured folk music and colorful folk dances from across India. IAGB, founded in 1962, strives to foster a strong Indian cultural and community presence in the Greater Boston area.

Here is a complete list of all the items, participants and teachers and coordinators:

Indian wedding rituals have had a long history of folk music accompaniment to the different ceremonies that comprise a ritual. Whether it be a Haldi ceremony, Gowri puja, Mehendi Sangeet ceremony, Tilak, Saptapadi or Vidaii – a special song is sung by women to mark the ceremony.

A musical act that gives the message of how farmers are struggling in Indian villages and that they are in need of help. Poor farmers, who incur heavy losses take extreme steps to end their lives. There is a need to save farmers and this act attempts to bring out that message.

The performance will take you through the vibrant states of Rajasthan and Chhattisgarh as you see kids perform various folk dances from this region.

Gondhal is an important religious ceremony for the Maharashtrian community and is usually performed in honor of and dedicated to Mother Bhawani during the night of the marriage of the eldest and/or the youngest son of most families. Gondhal is one of those few important folk arts of Maharashtra that has become an inseparable part of the lifestyle of the people.

Folk dance from Gujarat, depicting the bygone days of going to a fair or a carnival. Young boys and girls looked forward to going to fairs as that was their platform to meet new friends. Boys would buy bangles, sarees etc., to gift their girlfriends.

Little children performing a folk song from one of the most “happening” states of India – Goa. Here, they are dancing to the tunes of one of the iconic singers from Goa – Remo Fernandes.

India is a country where cultures come together. Every state in India has its own culture, identity and lifestyle. Today, we are showcasing two such major cultures, Punjabi and Gujarati.

Kavadi is a dance style commonly practiced in Tamil Nadu. Praising Lord Murugan, son of lord Shiva and his great accomplishments and beauty, the dancers use a Kavadi, decorated with peacock feathers and bright colors, to express happiness, joy and devotion to the lord.

The dance item starts with the graceful flowing moves of the Shanti Niketan style of dance of Bengal, touches upon the tea dances of the hills of Darjeeling and Mirik, and continues to transcend to the joyous moves of Bhangra from Punjab, and ends with the rhythmic sway of the Dandiya sticks from Gujarat. A celebration of just a few of the colorful and breathtaking folk dances of India.

Holiya is a Rajasthani folk song based on the festival of Holi. It demonstrates the fun you have in Holi with colors, your friends and family.

This medley describes the beauty of the rains in India. The dark clouds hovering over the sky, the hissing tunes of the rains and droplets trickling over the roofs, the young girls play in the muddy puddles and enjoy a moment of madness!

Traditional folk dance performed by worshippers of Yellamma Devi. Jogwa is typically performed by Jogta and Jogtin in the states of Maharashtra, Karnataka and Andhra Pradesh.

Ghoomar, a folk dance from Rajasthan, is sometimes called “jhumar.” It is joyfully performed by groups of women from all age groups with simple swaying movements, they move in a circular fashion in their swirling ghaagras (skirts). They are accompanied by men and women singing together.

Lavani the most popular folk dance in the state of Maharashtra, became mainstream dance during 18th century. Donned in nine-yard sarees, heavy ghungroos on the feet and intricate nath (nose ornaments), Lavani dancers combine body movements, striking expressions and upbeat songs to perform on themes of love, romance and socio-political situations to the enchanting beats of a dholaki.

Margamkali is a traditional folk dance of Christians in Kerala. Female dancers sing and dance, clapping around a Nilavilakku wearing the traditional white dhoti (mundu) and blouse (chatta).

Feel the rhythm of Gujarat through the beats of dandiya sticks and claps of these Gujaratans, as they present a vibrant dance performance based on traditional Gujarati folk songs.

A beautiful performance of folk dances from different states of India by the graceful dancers of Bollywood Dance Academy, representing Gujarat, Rajasthan, Maharashtra and Punjab.

Rajasthani folk dances are very colorful with great beats and require perfect timing and balance. This folk dance medley depicts the slow, graceful movements of Ghoomar dance, and the high energy of Rajasthani boys as they celebrate love in a sweet song called Baware.

A legendary folk dance of garba and raas, which has many variations. Garba can have either two or three clap steps. They can be graceful or forceful.  There are different ways of executing dandiya steps. Matukadi and supda dance are other forms of Gujarati folk dances.

This medley shows India’s colorful culture through our traditions based on Worship (Puja), Love (Prem) and Festivals (Utsav).

Dindi dance is a traditional folk dance from Maharashtra, depicting warakari or devotees marching from their homes to Pandharpur to worship Vitthal. It’s a religious procession celebrated during Ashaad Shukla Paksha in June-July.

This item is an energetic tribal dance from Nagaland, performed forcefully with bamboo sticks to express joy and happiness.

The event was organized by India Association of Greater Boston ( www.IAGB.org) and Saheli whose members are: