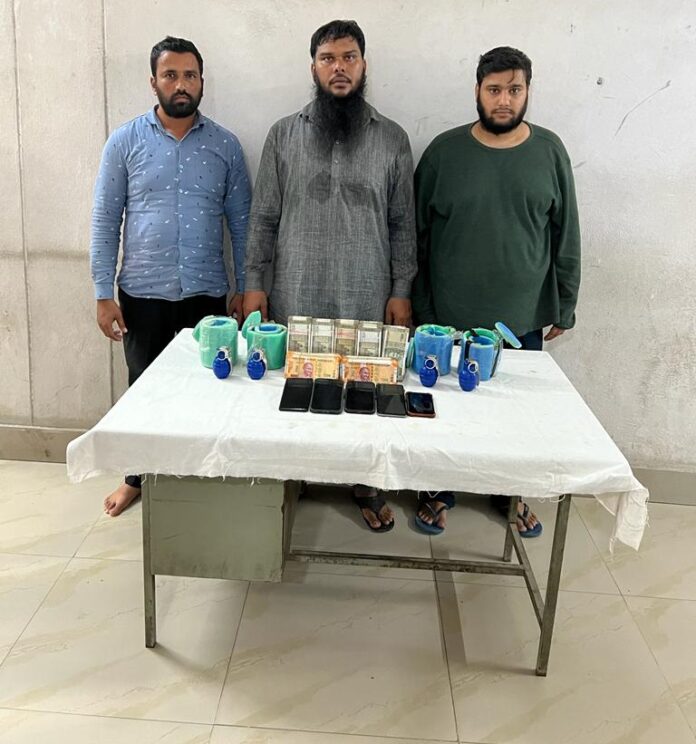 Hyderabad–The Hyderabad police on Sunday busted a conspiracy to create terror and mayhem in the city through bombing attacks and lone-wolf attacks.

Three persons with links to the Pakistan’s ISI and LeT were arrested in this connection from Malakpet in the city, Hyderabad police said on Sunday.

Along with arresting the three persons, identified as Identified as Abdul Zahed, Mohd Sameeuddin, and Maaz Hasan Farooq, the police siezed four hand grenades, a motorbike, and cash.

The police said that the three were planning terror attacks in the city.

Abdul Zahed previously involved in several terror related cases in Hyderabad including suicide attack on the attack on the Hyderabad City Police Commissioner’s task force office Begumpet in 2005. He was in regular touch with Pakistani ISI-LeT handlers.

Hyderabad police said that, on receiving credible information the police had conducted raids and arrested the three persons. The arrested had recieved four hand grenades which they planned to use for terror attacks in Hyderabad, he explained.

The arrested were allegedly acting under the guidance of three absconding persons from Hyderabad, who are currently taking shelter in Pakistan and working for the ISI-LeT.

Abdul Zahed in his confession has revealed that Farhatulla Ghori, Abu Hamzala and Majeed revived their contacts with him and they motivated and financed Zahed to recruit and carryout out terror attacks in Hyderabad again.

“At the behest of Pakistan based handlers, Zahed recruited Samiuddin and Maaz Hasan,” the police stated.

All the three persons have been sent to judicial remand after they were presented at the court. (IANS)