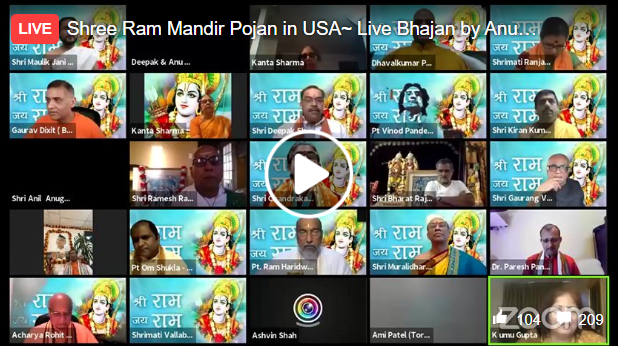 As the Ayodhya administration in India was getting ready for the foundation laying ceremony of the Lord Ram temple on Wednesday, August 5, the Hindu Mandir Executives’ Conference (HMEC) and Hindu Mandir Priests’ Conference (HMPC) held a virtual collective national prayer across America to rejoice in the upcoming “Shree Ram Mandir Poojan” at Ayodhya.

The Vishwa Hindu Parishad of America organized the prayer to mark Wednesday’s ceremony, a one-of-a-kind and historic event on 5th August in Ayodhya, when Prime Minister Prime Minister Narendra Modi will be worshiping with revered saints, scholars, trustees and other dignitaries for the grand Janmabhoomi temple of Bhagwan Shri Ram.

Gaurang Vaishnav, Member Advisory Board of World Hindu Council of America (VHPA), Tampa FL, said: “August 5, 2020 will be written in golden letters in the history of Bharat (India) and Hindus. This is the day when after a long wait of 492 years, construction of a grand Shri Ram Mandir will begin at his birthplace in Ayodhya. I recall with joy the efforts of VHP in Bharat and elsewhere, to bring Hindus together to fight for what was theirs and was taken by the invaders. My hearty congratulations to not only all Hindus but also to those who respect and cherish the culture, heritage and unity of Bharat.”

On this occasion of the fulfilment of the aspirations of the Rama Mandir, executives and the Mandir priests across USA, Canada and Caribbean Islands join in offering on the eve of the Ram Mandir reconstruction poojan.

“With utmost reverence, I remember two great personalities, Shree Ashok Singhal and Pujya Mahant Shree Avaidynath, who are no longer with us, but whose vision, sacrifice, determination, leadership, blessings and resolve has made this dream of the reconstruction of the Ram Mandir in Ayodhya a reality. For a joyful global Hindu community, the historic ceremony on Aug 5, 2020, marks the ushering of a new era. We should cherish and celebrate this day as a festival now, and forever in the future,” said Pandit Krishna Kumar Pandey, founder, president and Acharya of the Shiv Durga Temple, Bay Area, CA

The Vishwa Hindu Parishad of America (VHPA) will host the Facebook live stream of the August 5 program of foundation laying of Shree Ram Mandir by Prime Minister Narendra Modi at 1.30 am (CST)/ 2.30 am (EST)/ 11.30 pm (PST).