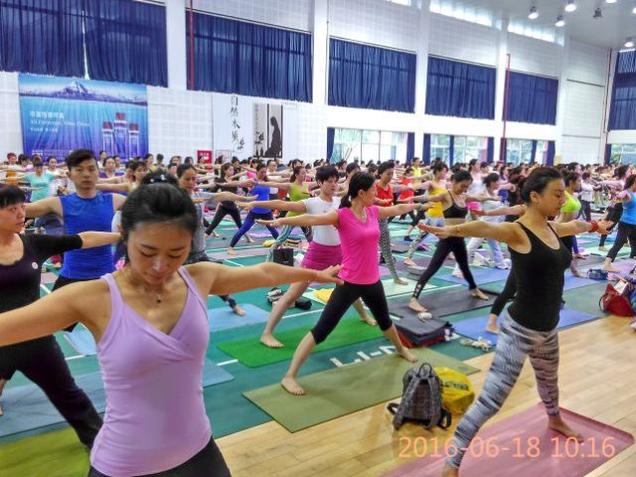 Beijing– A fusion of Yoga and Tai Chi, a form of Chinese martial art, near the iconic Great Wall in Beijing was the cynosure of all eyes as thousands of people participated in mass events in various Chinese cities to mark the second Internatonal Yoga Day on Tuesday.

Clad in white T-shirts bearing the sign of Aum, scores of Yoga enthusiasts gathered at the Wall to perform asanas or exercises, guided by Indian Yoga experts and Tai Chi masters.

The participants were mostly young men and women breathing in and out and performing Yoga stretches in a harmony as Indian devotional songs played in the background. As drones hovered over the iconic structure, the participants also performed Tai Chi — a form of martial art also used for battling stress.

The event was organised by the Indian embassy here and state-run Chinese People’s Association for Friendship with Foreign Countries (CPAFFC).

In nine cities of east China, some 9,000 people attended the events organised by Indian Consulate with local administration.

Over the years, Yoga is gaining popularity in China where the ancient Indian discipline was introduced in 1989.

Fitness clubs in Beijing are now considered incomplete without Yoga instructors and the number of Yoga institutes in Beijing’s Chaoyang district has shot up from to around 1,000 in 2015 from just three in 2003.

People also practice the discipline in cities like Shanghai and Guangzhou.

Meanwhile, an online news website reported that China broke the world record for conducting the largest prenatal Yoga classes in five cities where 1,443 pregnant women simultaneously practised it. The previous record of 533 was also recorded in China in last year. (IANS)

Indian American killed in US state of Georgia, family injured

The age of AI is upon us and Microsoft is powering it: Satya Nadella

Indian man shot dead in US by 3 masked men