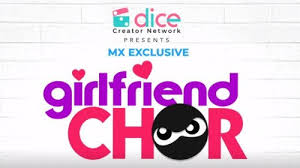 In this season of corona confinement, people will watch whatever plays out on whichever screen that flashes before their eyes. A whole lot of digital stuff will get noticed that way, and if “Girlfriend Chor” happens to belong to that lot it is not necessarily because this is a bad show.

Writer-director Girish Jotwani’s rom-com is enjoyable, if only because it doesn’t pretend to be anything more than an easy, breezy watch. Put simply, it is about a social oddball whose Daddy Cool takes it on himself to put the son’s love life on track.

“Girlfriend Chor” avoids the deeper contexts of generation gap or mindset disparity that such a situation might lead to — in fact, the show avoids getting into any sort of complications of any kind. The focus remains on hearty humour, Jotwani and team have done adequately to that extent.

This is the story of Aakash (Mayur More) and his onesided love for the uber-cool Neha (Himanshi Sharma), though she seems to flip for the smarter, richer Vishal (Kushagre Dua). That’s where Akash’s dad (Shishir Sharma) comes up with a plan. He suggests Akash to act as if he is in love with the Friendly Neighbourhood Nice Girl, Ritu (Diksha Juneja). The idea is to distract Neha’s attention from Vishal and hence trigger a rift between the two. Of course, there are twists on the way — standard filmi ones, but executed with the right mix of humour and drama.

It doesn’t take you long to realise the template on which the characters work. If Akash is broadly Archie, Ritu makes a desi-fied Betty to Neha’s Veronica. Vishal could be Reggie with a few adjustments.

The young cast plays out the roles with originality despite the hangover of ‘inspiration’, making each character their own. The really impressive performance, however, comes from Shishir Verma. Long confined to a handful of scenes in many a Bollywood blockbuster, the senior actor comes up a winner in what must definitely be the role of his lifetime yet.

A big reason the show works has to be the fact that Jotwani has confined the script to just five episodes. Comic drama cutting across sub-genres tends to bore if brevity is compromised — last week’s black comedy “Hasmukh” being a prime example. “Girlfriend Chor” maybe comparatively more uncomplicated in its intent, but the joke here ends while it is still funny.

They’ve hinted at season two at the end. We would say there is scope to re-haul the good clean fun, just tone down the melodrama the next time. (IANS)