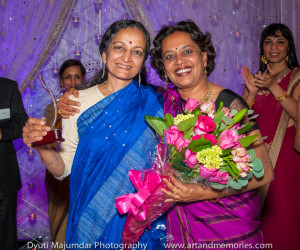 BURLINGTON, MA—Geeta Aiyer, founder, president, and chief strategist of Boston Common Asset Management and a crusader against violence against women, is 2014 Woman of the Year. She was crowned Woman of the Year 2014 at the 12th Annual Woman of the Year Awards gala organized by INDIA New England News at the Burlington Marriott Hotel in Burlington, MA.

“What impressed us the most about Geetha is her huge impact and ownership, not just in the business world, but also social activities. Her dedication, quick action, inspirational leadership and down to earth attitude are commendable,” said Gaugarin Oliver, an entrepreneur and president of TiE-Boston who served as the chairman of a panel of seven independent judges. “Picking 20 finalists from 295 nominations and then selecting a winner is daunting. The applicant pool was made of amazing women. I applaud India New England for the meticulous process, and the preparedness and thoughtful due diligence by the judges to accomplish this very important task.”

With a fervent passion for the environment and social justice, Aiyer has built a great business. Boston Common Asset Management, which she founded in 2003, now manages over $2 billion in assets. She has built a strong investment record and substantially improved the policies and practices of portfolio companies. In addition, Aiyer has founded two previous companies, Walden Capital Management and East India Spice, as well as an NGO, Direct Action for Women Now (DAWN).

Aiyer was honored with the 2013 SRI Service Award at the SRI (Sustainable, Responsible, Impact Investing) Conference and was the 2010 recipient of the Women’s Venture Fund’s Highest Leaf Award. In 2013, Boston Common received a Human Rights Award from Political Asylum Immigration Representation Project (PAIR) and was named one of the top 100 women-led firms in Massachusetts.

Desh Deshpande, one of the nation’s leading philanthropists, was the chief guest and gave awards to 20 outstanding women and finalists during the event, which was attended by more than 450 business and community leaders from across New England.

“I was very impressed with the sheer quantity and the breadth of leadership among women nominated for the award. I want to thank India New England News, Upendra Mishra and Manju Sheth for institutionalizing this annual event and recognizing and inspiring women,” Deshpande said. “All the nominees and the winner made me feel very proud about our community.”

He said women have made good progress in all areas.

“When I graduated from IIT Madras in 1973, there were 250 of us from the graduating class. There were 249 boys and one girl,” Deshpande said. “Forty years later, when you look at engineering schools there are more girls qualifying than boys. At some point we may have to impose quotas for boys to make sure they get in. This just goes to show that when women are encouraged and given a level playing ground, women do better than men.”

After being chosen Woman of the Year 2014, Aiyer said she was: “surprised, honored, humbled, touched, very happy.”

When asked what are her plans for women’s causes this year, she said: “Through my work at Boston Common Asset Management, we are working as shareholder, to have more women on corporate boards and in top management as we believe this diversity improves risk management and effectiveness in companies. Our goal is to have 30% women on boards! As a board member of YW Boston, support education and training to end racism and empower women in Boston, and through Ubuntu at Work, help create opportunity for women globally.”

Aiyer added: “Through my non-profit DAWN Worldwide, my focus is on gender based violence: we plan to deepen our work in caring for survivors, and prevention by engaging men, boys and civic society organizations. This year, I hope we move forward with our Media efforts, and begin the ambitious work of caring for survivors of egregious violence — gang rape, acid attacks, and child victims. My hope is also to change the Language around this vital set of issues, to raise the “respect” or “maryada” in our society, for India’s Largest Minority, which is Women!”

Mondira (Mandy) Deb Pant and Aditi Taylor, Boston’s two emerging leaders in business and technology, served as Masters of Ceremony of the Woman of the Year 2014 Awards Gala celebrations. Pant is Academic Research Director at Intel. Taylor is a Principal in the Boston office of Deloitte & Touche LLP’s Governance, Risk and Regulatory Services practice. Dr. Manju Sheth, a physician at Lahey Health and a community leader and activist championing women’s rights and children’s education and health, served as the hostess of the evening.