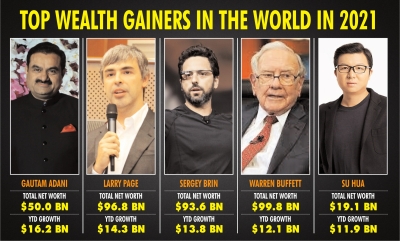 New Delhi–Adani Group Chairman Gautam Adani has achieved a remarkable milestone amid the Covid-19 pandemic, as he added the highest wealth to his fortune in the world, as per the latest Bloomberg Billionaires Index.

The Bloomberg Billionaires Index showed that so far in 2021, Adani has added $16.2 billion, taking his total net worth to $50 billion. With this surge in his wealth, Adani is now the 26th richest person in the world.

He even beat two of world’s richest individuals, Jeff Bezos and Elon Musk, in terms of wealth generation this year. While Musk has added $10.3 billion to his net worth so far, Bezos has seen a downturn of 7.59 billion.

The development comes at a time when the Adani Group is rapidly expanding its footprint in diversified sectors, including airports business and data centres. Recently, Adani Ports and Special Economic Zone Limited announced that Windy Lakeside Investment Ltd, a unit of Warburg Pincus, will invest Rs 800 crore for a 0.49 per cent stake in the company.

Shares of several Adani companies have surged over the past one year amid the pandemic, adding to its Chairman’s wealth. Adani Enterprises’ shares have increased over four-fold in the past one year and the stock price of Adani Ports and Special Economic Zone has more than double during the period.

Google Co-founder Larry Page is ranked second in terms of highest gain in wealth with a growth of $14.3 billion.

Reliance Industries Chairman Mukesh Ambani is the 10th richest person in the world with a net worth of $84.8 billion. So far in 2021, he has added $8.05 billion of wealth. (IANS)