Buddha, the enlightened name of Siddarth, is known as the founder of Buddhism, one of the world’s fastest growing spiritual paths or religions followed by nearly 500 million people across the globe.

To many, the title of Mr. Sinha’s book and his ideas may seem contradictory, but he is very clear: “Buddha is a concept, wisdom and perpetual state of awakenedess, that never dies.” For him, “awakenedess” is also a five-step intrinsic stimulus-response mechanism: Awareness, Awakenness, Acknowledgement, Acceptance and Action – in this order.

“Cumulatively, these 5 represent our true conscious and true self,” says Mr. Sinha, who was born in a family that had a reputation of mediocre financially but intellectual elites. 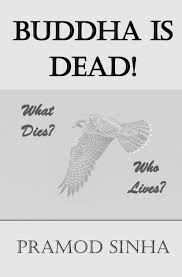 “As a child I was introduced to reciting scriptures in Sanskrit well before I was introduced to pen and black slate writing-board. Instilled in my childhood was capturing knowledge from wherever I could was the only way to survive. I have pursued it and continue to,” says Mr. Sinha.

By the age of seven, he could recite books in Sanskrit and Pali – though, did not understand a word that he was reciting. In addition, he knew four conversational languages—Hindi, Assamese, Bengali and English—besides his mother tongue Bhojpuri.

Mr. Sinha says that his unique talent allowed his mother to put him with a Tantrik monk to learn methods to cure his severely ill father through mantras and rituals.

“Doctors had been unable to diagnose my father’s illness and he was getting worse day by day. I learned and I learned hard, it was a matter of survival for all of us,” Mr. Sinha says. “I had a good teacher who taught me not to accept anything unless logically proven. Finally, by mid-1965 my father was well again, almost never to fall sick till the day he passed on at the age of 95. I learnt quite a few languages as I grew old. I wanted to communicate with different people in their own language, I believed then and believe it now as the best way. I started writing in school journals and ghost wrote college level lectures in religion and philosophy for some friends of my father’s.”

After he completed his Masters in Public Administration, Mr. Sinha came to Jawaharlal Nehru University (JNU)  in New Delhi to study Linguistics.

“Five years in JNU, taught by great teachers, my thirst for meaning and truth expanded and I read anything that I could lay my hands on concerning topics of logic, meaning and truth. In the early eighties I got married and used my natural linguistic talents to earn some extra money translating books and I did quite a few,” says Mr. Sinha.

In the late eighties when he emigrated to the United States with his family, his education led him to the corporate world where he spent the last three decades understanding oral and printed constructs or expressions, and interpreting them for machines.

“This is labeled as artificial intelligence and machine learning for general populous. In short, professionally I function as a scientist. As soon as I settled I started writing and at one point I was working on four books at one time,” says Mr. Sinha. “The result was as anyone’s guess, none of them got to fruition. I struggled to finish my books for a number of years and I took a pause. Life altering experiences in the beginning of the second decade of the 21st century altered my thought process completely where I believe I was completely engulfed with insidious, self-promoting/loathing and full blast egoic man living permanently in his own imagerium.”

Mr. Sinha spent a good number of years pampering himself and then one day he realized that his own ignorance in understanding almost anything is the cause of all of his miseries.

“I read and re-read all the books I thought I had read. It was astounding to redefine my own self as false self, fabricated by falsities of various sorts that had nothing to do with who I was to begin with. This egoic, ignorant and self-justified self of mine was definitely a false self of mine,” says Mr. Sinha. “Then the journey started and it was a death battle in a way. If I, my true self, my humble, serene self needs to live then I, my false self needs to die. If I have to attain ‘Buddha’, all ignorance, pretenses of knowing and arrogance to justify inabilities must die.

I love my current state of placid tranquility and I penned my experiences in “Buddha is Dead: What dies Who lives.”

Here is a Q/A with Mr. Sinha about his first book:

INDIA New England News: Buddha died more than 2,000 years ago. Why this title of this book, now?

Pramod Sinha: Siddarth was born and Siddarth died. Buddha did not get born and it did not die either. Buddha is a concept, wisdom and perpetual state of awakenedness, that never dies. Title of my book illustrates my understanding.

INE: What are the three key messages of this book–from your perspective?

PS: The three messages are:

INE: What motivated you to write this book?

PS: I was introduced to reading of scriptures at a very early age of eight. Reading and understanding learned ancestors had been a discipline for me to investigate what could be the “Truth”. This took me to multiple religious beliefs, scriptures, customs and traditions and their own flavors of the “Truth”.

I started this book some ten years ago and titled it “Truth and Truthiness”. Meanwhile, a number upheavals in personal life stopped the progress. In the last 4-5 years I had occasions to interact with hundreds of beautiful souls who really want to understand their lives and be at peace with it. They found themselves heading to the abyss. My suggestions, direct and unvarnished, helped them and the direction of my book changed. So it is now almost a spy novel, we are the spy and the fugitive at the same time.

INE: When one finds unable to cope with some very difficult challenges of life, how can Buddhist philosophy help cope with?

PS: Today’s therapeutic, eclectic, philosophy or any other “feel good” methodologies fail to identify one single root cause of all challenges we encounter, and that is “Ignorance”. Siddharth was ignorant of the causes of Poverty, Disease, Sickness and Death. He embarked upon a quest to find out the causes and understand his ignorance. Once he understood it, he attained wisdom, he saw the Truth – he became “The Buddha”.

INE: What about Mohammad, Jesus Christ or other religious figures?

PS: Later this year you will see my book on the life of an Indian mythological and religious icon, where I have picked some human stories and envisioned his character. My character is human in the sense that he is not divine per se. Miracles do not happen in my stories. Everything (I am not distinguishing good or bad) happens because someone worked for it.  Most of these icons will be featured in my subsequent stories. Absolutely nothing pertaining to religions, I must emphasize.

INE: If you take natural challenges or catastrophes on one side, and self-doubt, fear and feeling of inadequacy on the other side, how much we human beings responsible for our own miseries or bliss and how?

PS: As I mentioned earlier, ignorance is the roadblock to the kingdom of peace. Our reluctance to accept, acknowledge and act to understand and remove the barrier, bestows untold miseries to us. If we continue to be completely shrouded in ignorance and our false self relentlessly denies our ignorance, we will never come out of this dark prison we fabricated ourselves.

INE: Who will benefit the most from your book?

PS: I believe that anyone who genuinely wants to be at peace with him/herself will benefit. Because my concepts have one meaning, I do not leave anything for speculative decisions and try to be as direct and fortify them with examples anyone can relate to – religious or agnostic.

(With the golden disc (illuminated lid) the face of the Truth is covered.

Oh sun, you remove that! Let me (us) see with Truth behind it!)