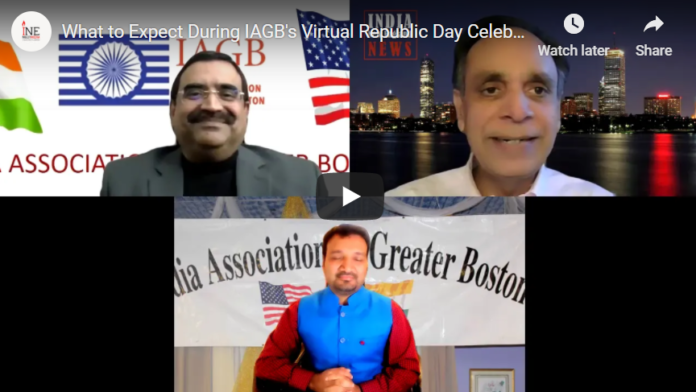 The three-and-hour packed program will include a series of cultural, musical and dance programs performed by artists from India as well as New England. The program is free and will be broadcast on IAGB’s Facebook pages as well as on its YouTube channel. The audience can also order desi food online at a discounted rate and the fool will be delivered at their home in Greater Boston.

An attractive line up of stars and performers are lined up by the IAGB committee to mark the occasion. The Chief Guest for the event will be Randhir Jaiswal, the Consul General of India, New York.

The event will start with the opening anthems of USA and India sung by Mary Millben, the well-known American singer/actor who has performed for 3 consecutive US Presidents.

The grand music concert on the Finale will be jointly presented by the versatile, singer, performer, voice artist and Bollywood celebrity Sudesh Bhosale and the famous playback singer Vaishali Made of the “Pinga” song from the movie Bajirao Mastaani.

This concert will feature a live orchestra and music band. Sudesh Bhosale has sung many famous Bollywood songs for Amitabh Bachchan including “Jumma chumma de” from 1991 movie Hum. He can mimic numerous Bollywood stars including Ashok Kumar (Dadamoni), Amitabh Bachchan, Vinod Khanna, Sunil Dutt and Sanjeev Kumar. He has been awarded the Mother Teresa Millennium Award for his contribution to music in a ceremony in Kolkata in 2008.

For more details, visit www.iagb.org or send an email to iagb@iagb.org.