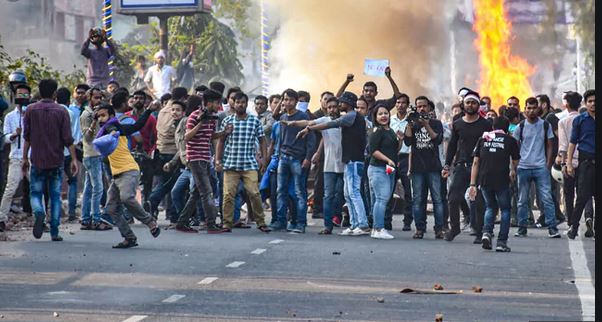 Guwahati– Assam was rocked by violence against the controversial Citizenship (Amendment) Bill (CAB), which was passed by the Rajya Sabha on Wednesday, as protesters hit the streets in thousands, burning tyres and wooden logs, prompting the administration to impose curfew in Guwahati and suspend mobile internet services in 10 districts of the state. The army undertook a flag march in Dibrugarh.

The CAB was earlier passed by the Lok Sabha at the stroke of midnight on Monday.

On a day when lawmakers debated the CAB in the Rajya Sabha, Assam was on the boil, with protesters raising slogans against the Central and state governments, and demanding unconditional withdrawal of the legislation. They fought pitched battles with the police, turning various parts of the stare into virtual battle grounds.

Assam Chief Minister Sarbananda Sonowal remained stuck at the Lokpriya Gopinath Bordoloi International airport here for hours after landing in the state capital from Tezpur, as his convoy could not roll out due to the massive protests.

The administration tried to tackle the situation by imposing curfew from 6-15 p.m. The curfew will continue till 7 a.m. on Thursday, a senior police officer said.

Mobile internet services were suspended in 10 troubled districts — Lakhimpur, Dhemaji, Tinsukia, Dibrugarh, Charaideo, Sivasagar, Jorhat, Golaghat, Kamrup (Metro) and Kamrup districts — for 24 hours to thwart any effort to spread rumours and misinformation, while a column of army was kept on standby in Bongaigaon town.

The protests, which had started days back, intensified during the day after Union Home Minister Amit Shah tabled the legislation in the Upper House of the Parliament.

The protesters tried to march towards the state Secretariat here and threw bricks at the police and burnt tyres on the roads, creating a volatile situation. Secretariat employees also expressed solidarity with the protesters.

The protesters, including a large number of students, forcibly shut down shops and markets, and damaged a fire brigade vehicle till they were stopped by BSF, Rapid Action Force and police personnel about 500 metre from the Secretariat.

“We have used tear gas, rubber bullets, water canon, and resorted to mild lathi charge to scare them away. Some of our personnel were also injured,” said Guwahati police commissioner Dipak Kumar.

Girls joined the protests in good numbers, holding aloft placards and posters reading “no citizenship on the basis of religion”.

“This Act is unconstitutional. We Assamese indigenous people will never accept it,” said a protester.

At least 25 protesters — among them several students — sustained injuries as they fought pitched battles with the police in different parts of the state.

At least 10 companies of paramilitary forces have been deployed in the state. (IANS)