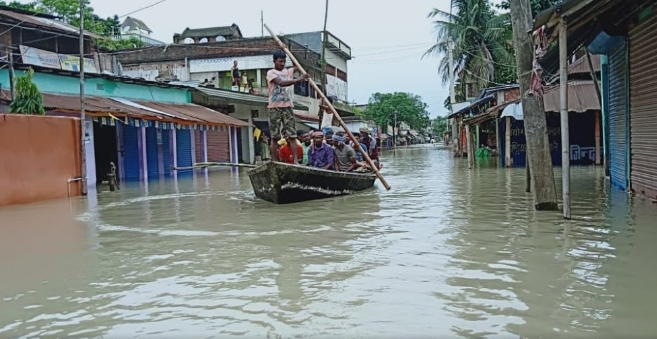 Patna–The railway services on the Samastipur-Darbhanga route were suspended on Sunday as it got submerged in the flood, which has affected as many as 13 districts in Bihar.

According to Chief PRO of East-Central railway Rajesh Kumar, 10 trains have been cancelled and 12 others re-routed as the flood water reached the bridge number 16 at Hayaghat station in the Samastipur division.

Due to the suspension of services, train travel from Delhi, Mumbai and Kolkata to Darbhanga, Madhubani, Jaynagar, Jhanjharpur and Nirmali has become difficult.

While the water level in major rivers has started receding, at some places they are still flowing above the danger-mark.

According to the Water Resources Department, river Bagmati is flowing above the danger mark in areas like Denga, Dubadhar and Benibad. Mahananda, Kamala-Balan and the Adhwara group of rivers are still in the spate. (IANS)