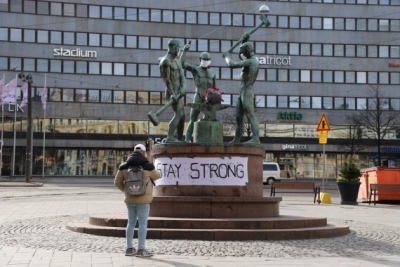 Helsinki– For a fourth consecutive year and despite the Covid-19 pandemic, Finland has been ranked the world’s happiest country, a UN report said on Friday.

The researchers said this was “no surprise”, citing that Finland has “always ranked very high on the measures of mutual trust that have helped to protect lives and livelihoods during the pandemic”, reports Xinhua news agency.

Finland was one of 23 surveyed countries that had a female head of government.

They “have tended to favour making policy with overall well-being as the objective, and this makes suppressing community transmission an even more obvious choice for them”, according to the World Happiness Report.

The report is based on three years of Gallup surveys of how happy citizens perceive themselves to be.

“The pandemic reminds us of our global environmental threats, the urgent need to cooperate, and the difficulties of achieving cooperation in each country and globally,” said co-editor Jeffrey D Sachs of Columbia University’s Center for Sustainable Development.

Factors used for the assessment include GDP per capita, healthy years of life expectancy, freedom, and perceived corruption in government and business.

Trailing the 149-strong list were Rwanda, Zimbabwe, and Afghanistan.

The report, commissioned by the UN Sustainable Development Solutions Network, was released in conjunction with the World Happiness Day. (IANS)