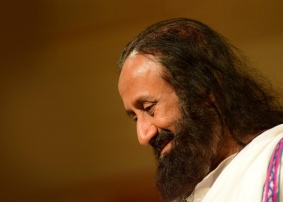 New Delhi– Art of Living founder Sri Sri Ravi Shankar on Tuesday said the authorities should have never given permission to hold the World Culture Festival (WCF) if the Yamuna was “so fragile and pure”.

He added that the fine should be levied on the National Green Tribunal (NGT) and the central and Delhi governments for giving permission to hold the event.

His remarks came after the report of an expert committee set up by NGT said it would take Rs 42.02 crore and a decade for the ecological rehabilitation of the Yamuna floodplains from adverse damages caused by the festival.

In a statement issued on Tuesday, Ravi Shankar said the Art of Living (AoL) obtained all the necessary permissions including NGT’s.

“The NGT had the application file for two months and they could have stopped it in the beginning. It defies all principles of natural justice that you give permissions and slap a fine for not violating any rules.

“If the Yamuna was so fragile and pure, they should have stopped the World Culture Festival at the very beginning. A historic programme, deserving of applause and appreciation, is unjustly projected as a crime,” he said.

Ravi Shankar added that the event, which saw over three million attendees from 155 countries over a three-day period, polluted neither air, water nor land.

“The world over, cultural programmes are held on riverbanks. The whole idea was to bring awareness to save the river.

“The Art of Living, that has rejuvenated 27 rivers, planted 71 million trees, revived several ponds, is being projected as destroying a dead river,” Ravi Shankar said.

The event was held on the left bank of the river between the Barapullah elevated road and the DND flyway between March 11 and 13, 2016.

The report of the seven-member expert committee, headed by former Secretary of Water Resources Ministry Shashi Shekhar, told the National Green Tribunal( NGT) about the ecological damage caused to over 300 acres of floodplains due to the festival last year.

The AoL has criticised the report stating it was deliberately leaked to the media and that some members of the committee were biased.

The next hearing over the matter in the NGT is on April 20. (IANS)