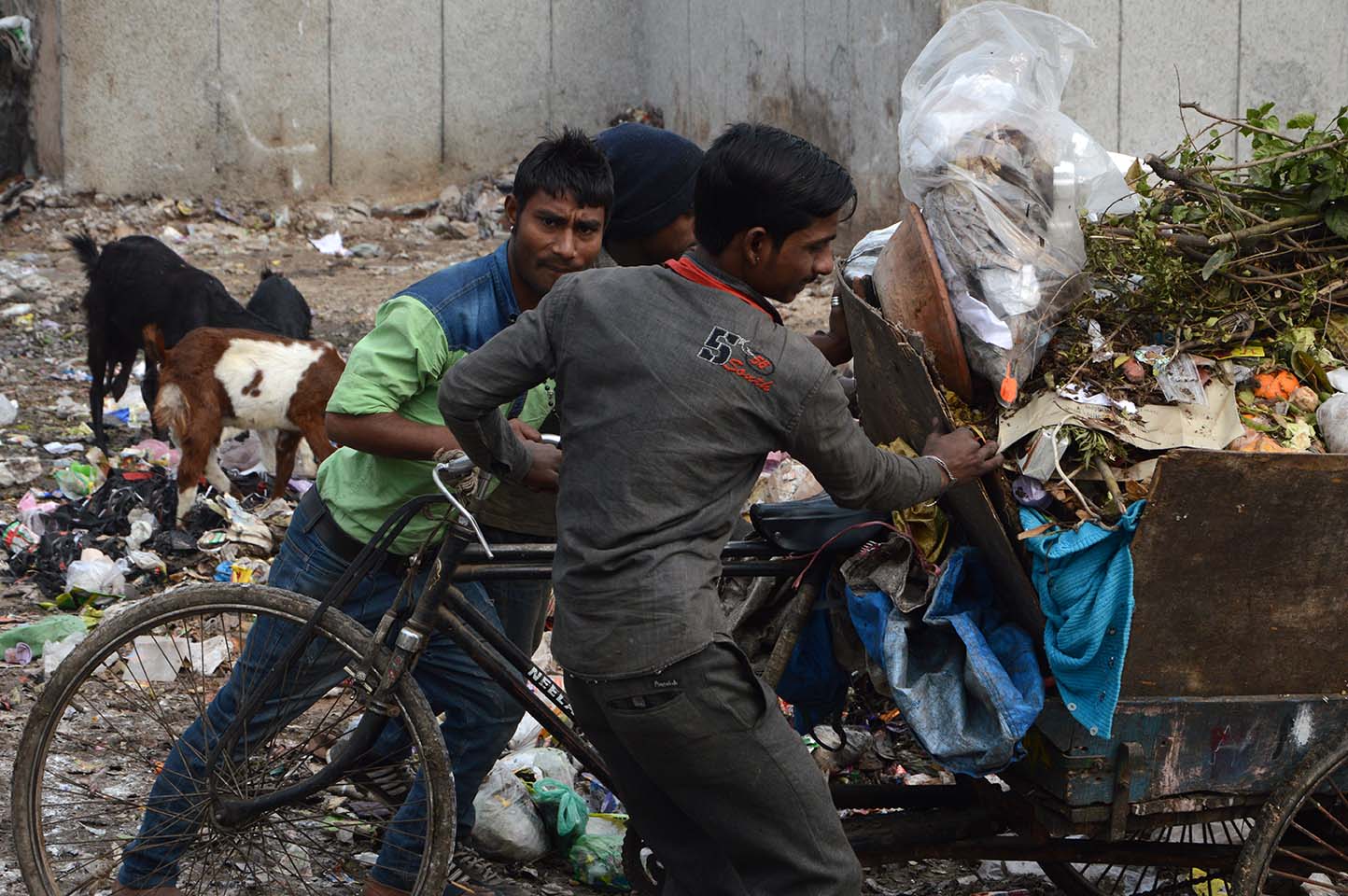 Photos and Text by Mandira Bahl

(Editor’s note:  The following report is produced by Mandira Bahl, an Indian photojournalist based in New York. Having recently graduated from the International Center of Photography (ICP), her work is a blend of documentation and research. She shoots travel, fashion, runway, portraiture, architecture and wildlife.)

NEW DELHI–Located in the heart of India’s capital Delhi is a hub of garbage disposal that has stood the test of time. It is a little world of that found refuge in Okhla- a name most would not have heard of and a place most would never want to visit.

On getting there, it looks no less than a miniature village, with cows and goats walking at an easy pace while they chew on mouthfuls of cud. Children play about bare feet in tattered to faded clothes and the dusty roads add to the environment. The stench of rotting garbage overpowers all the other senses that also bring in the flies and mosquitoes.

On entering the dhalao, one has to find a spot clean enough to set foot on as the only thing visible to the eye is waste and more waste, every variety, type and kind of waste. Their tools that include a long broom, a sifter and lots of over-sized plastic bags lay stained and peeling from being used daily. 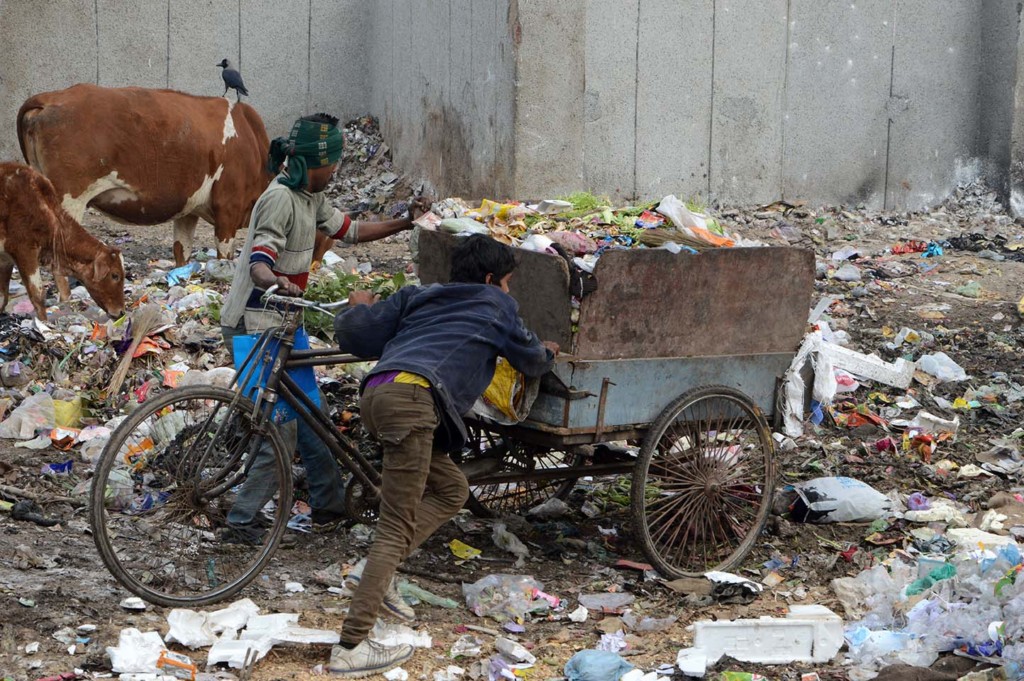 In this world of waste too, the rag pickers have learnt to be happy, smile and celebrate the small things in life while they continue to try and achieve their dreams. Many a times they hum a tune of a famous Bollywood song to keep themselves entertained while they dig through piles of trash for the day. 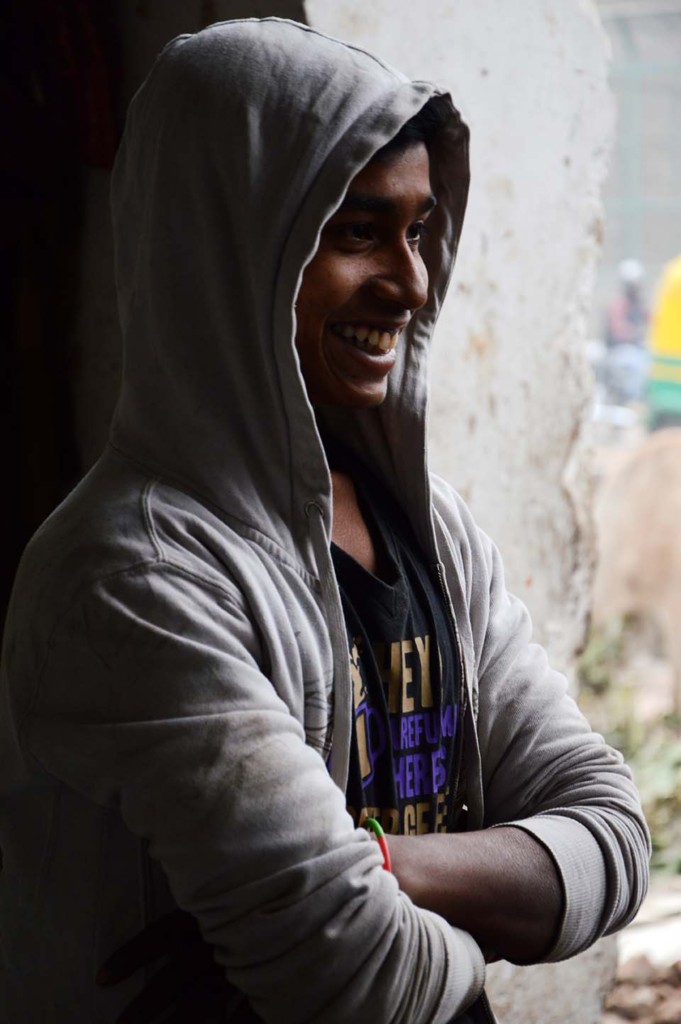 The most common site in Delhi are tiny tipper carts that primarily pick up domestic and other daily life waste. From homes to shops to hotels, these carts have a specific time when they go and do their task of collection. Once the respective and assigned trash collection is completed, they bring their share to drop off at what is called a dhalao (an open shed-like structure found along the roadside). These dhalaos are the primary segregation spots where the major separation of garbage happens. The trash is untied and poured out onto jute sacks that are used as a base.

The concept of segregating garbage before throwing it away is not that prevalent in India so what comes out onto the jute sack is a mix of plastic, metal, paper, cloth and food. This has to manually be separated into the different categories so each can further be treated and taken care of. As each form of waste has a unique method of being treated, this primary categorization helps make the rest of the process easier.

The dhalao is open on 3 sides and has a roof to prevent any water from mixing with the garbage. As it is an open dump, animals are seen grazing through heaps in hopes of finding some edible substance. This causes them to end up chewing plastic and other harmful elements that led to deaths. 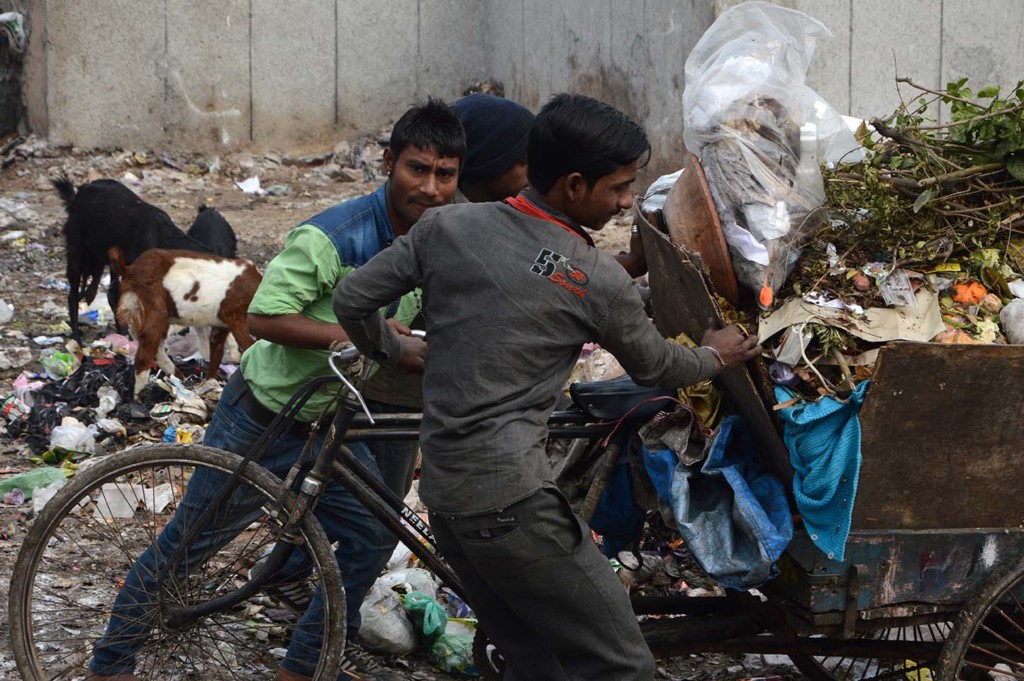 With rusting tools, bare hands and tearing footwear, the rag pickers work tirelessly on a daily basis. This is their home, their office and their little world where lies wrapped up probably their only meal for the day.

Most people who work as rag pickers are the lower class people who also do multiple jobs to bring home income. They are young to middle-aged migrants who come to cities like Delhi and Mumbai for better opportunities and for fulfilling their dreams.  As this is a very tiresome task, one would rarely see women at the dhalao digging through heaps of garbage and sorting them as per material and quantity. 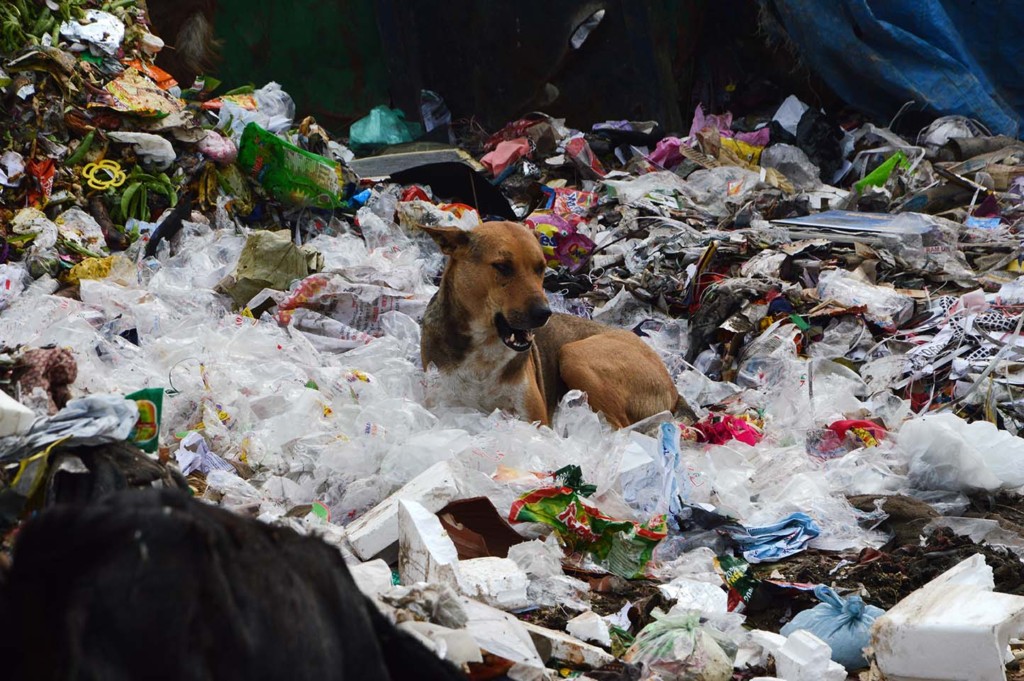 Occupational hazards such as getting cuts and injured is very common as the men come in contact with metal and sharp objects. Along with this, they are prone to being bit by dangerous mosquitoes that spread malaria and typhoid. Respiratory and gastric diseases are also commonly seen due to long exposures to waste and bacteria.

Once the segregation has been done, the garbage is then sent for secondary sorting. This happens deeper inside the Okhla region. As one drives into the narrowing lanes of this little garbage city, a smaller village set up is seen emerging. 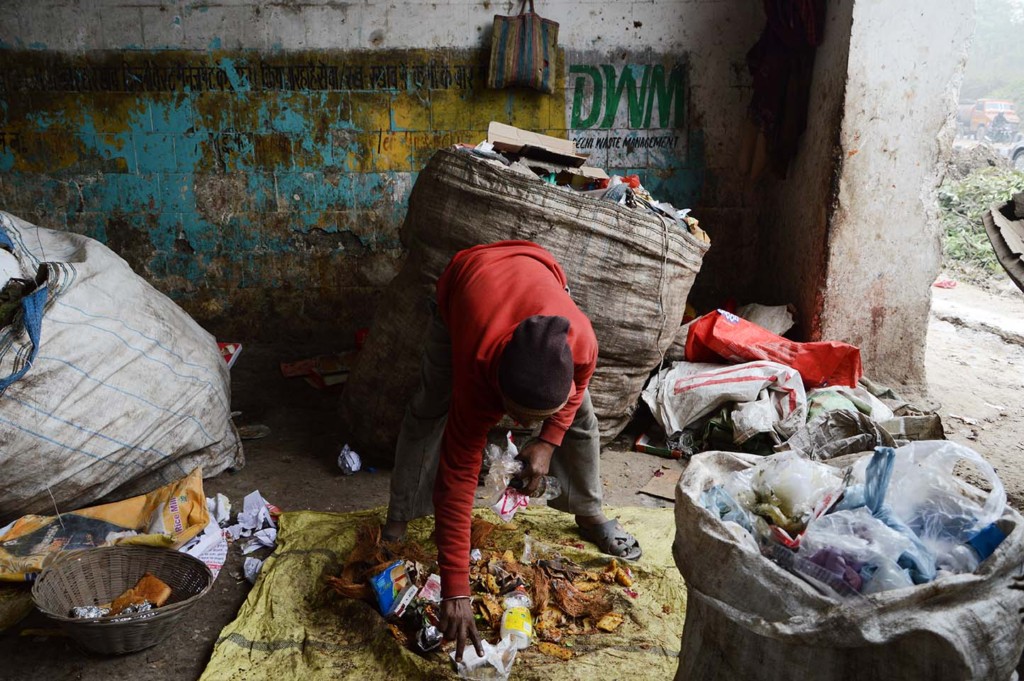 Small shops, tiny huts and hardly any vehicles is this simpler smaller world with only these tippers have access. The whole scene changes where women now enter the scene. They are seen sitting outside their matchbox homes cutting vegetables, cleaning rice and some even managing shops. Children are seen helping their fathers and uncles off load and load the garbage carrying tipper carts into an open ground that forms the central common area in their so-called residential settled society. 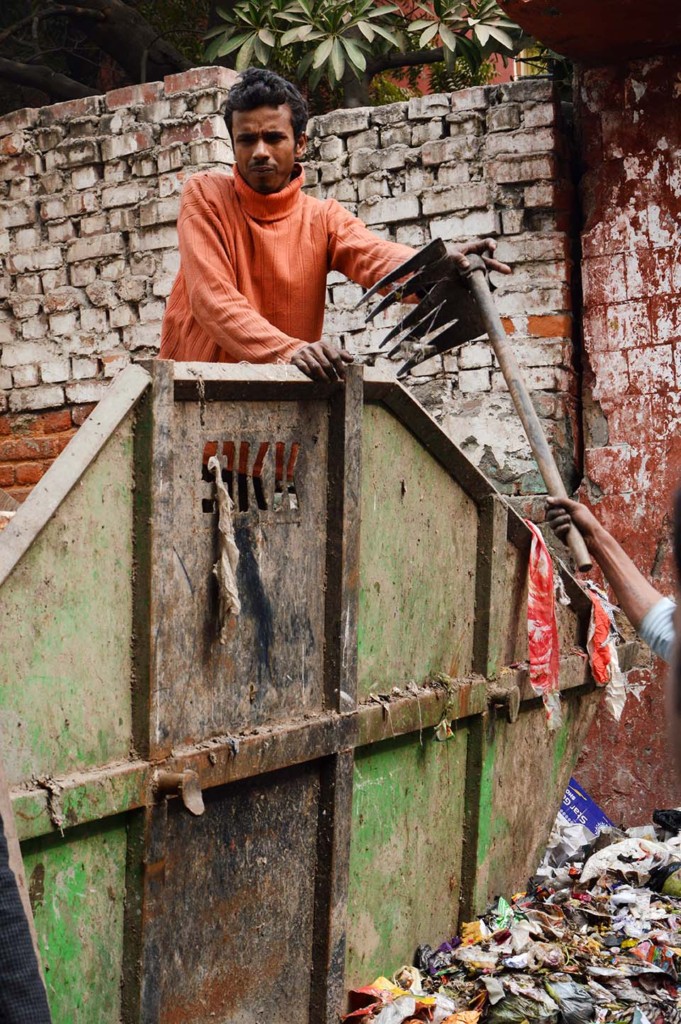 The women get together to segregate the waste into more minute and focused material which some they sell to agents and some they send to higher authorities to deal with. Families are involved in this process of garbage disposal.  Generations pass by in this practice and for many; this is a lineage and tradition that is only passed down. When asked what the young men feel about being a part of the waste management system, they proudly said that they are happy to do so as they have seen their ancestors work and gain from this.

This system is more than just a daily routine of collection, segregation and transferring further, and it is a business. Few people are aware that the garbage once segregated in the secondary spot is then sent to the waste to energy plant, which is located close to Delhi in a place called Gazipur. Here it is converted into fuel and manure that is then used further.

Talking about the business aspect of this process, the rag pickers compete with one another to be the most efficient and most productive.  The business runs on the quantity delivered by each rag picker to the thekedar (a leader of a group. Generally used for a village leader).

When they trash out bags, they forget about the journey that waste would be going to. Though a job for many, it is below human level to having to take for granted that someone will segregate the waste one can do on their own.

The amount of waste that is produced on a daily basis is shocking and treating the same is a bigger cause of worry. Garbage city is surely a city that has endless stories that lay hidden under layers of trash. It contains dreams of a happy family, some basic education, a better tomorrow or for just some basic respect.