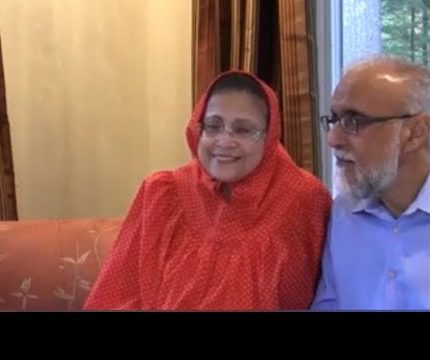 ANDOVER, MA—Husband-wife Team of high-tech entrepreneur Ashraf Dahod and physician wife Dr. Shamim Dahod have given tens of millions of dollars to hospitals, medical schools and other charitable causes from Boston to Bombay (now Mumbai).

In addition to practicing medicine and supporting charities and communities, Shamim herself is a breast and thyroid cancer survivor. She is a trustee of Boston University. Husband Ashraf is a serial technology entrepreneur, who produced the first cable modem in 1981, and today serves as CEO of Altiostar Networks.

In an exclusive Chai With Manju interview, Dahods talk about surviving cancer, giving, family faith, business, success and failures and philanthropy. On Nov. 15, the couple will be honored with Philanthropists of the Year Award at New England Choice Awards gala at Westin Hotel in Waltham, MA.

The annual gala is produced by INE Multimedia, a non-profit organization, in collaboration with INDIA New England News, one of the nation’s largest Indian-American newspapers.

The husband and wife team of Dahods have quietly supported a number of causes. A few years ago, they gave a $2 million gift for the creation of the Dahod Family Alumni Center in the Boston University Castle. The gift was the couple’s second major contribution to the University. They gave $10.5 million to the BU School of Medicine in 2008, which established the Shamim and Ashraf Dahod Breast Cancer Research Center and endowed assistant professor and international scholar positions there.