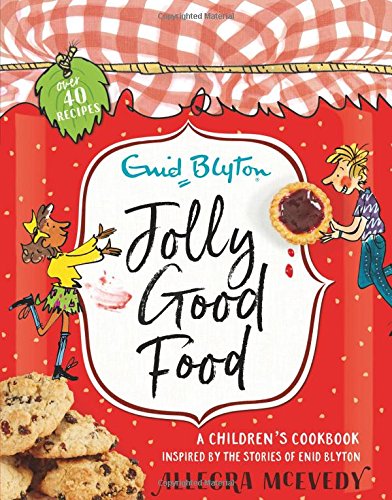 Enid Blyton knew her mysteries. She also knew her muffins and meringues.

In “Jolly Good Food”, Allegra McEvedy — chef, author and also co-founder of healthy fast food chain Leon — decodes the quintessential and mouth-watering treats littered in Blyton’s classic mystery series like the Famous Five and Secret Seven and brings them alive in the form of a recipe book interspersed with excerpts from the writer’s novels, where the protagonists pack their wholesome hampers or gorge on piping hot muffins or slosh down homemade lemonade all in the midst of solving mysteries and unearthing secrets in Britain’s suburbs or the countryside.

Neatly packed in 133 pages, complete with sketches and images, the hardbound book spells out more than 40 recipes, which break down the sumptuous food and drink that Blyton’s immortal characters have gorged on as fuel for their curious minds, keen on cracking the next puzzle.

Predictably, it’s all about traditional British snacks, which face a serious challenge from other world cuisines as well as those from the European continent. While Blyton’s books were elaborate and descriptive about the adventures and curiosities of the young, the mention of snacks, food and beverages, though inevitable, were limited to the finished product and the joys of consuming it. McEvedy attempts to fill this gap of sorts by conveying to fans of Blyton and good food about what goes into making treats like scones, apple tea, jam tarts and quiches.

The recipes are spread across six parts. Each part is dedicated to treats mentioned in six novels (or series), namely, “The Naughtiest Girl in School”, “The Secret Seven”, “Famous Five”, “The Faraway Tree”, “The Secret Island” and “Malory Towers” with beautiful illustrations by Mark Beech.

The six novels are some of the most popular works of Blyton, whose 600 books and over 500 short stories have been published in nearly 500 million copies, devoured by children and adults over generations and across continents.

The book’s third section opens with a passage, “Five Get Into Trouble”, where Julian, Dick, George, Anne and their pet dog Timmy stop at a store in a village called Manlington-Tovey and where Blyton’s technique of weaving food into fiction is best explained. The Five need a cooler and just as the doctor ordered, the store sells ice creams, lemonade, orangeade, lime juice, grapefruit juice and ginger beer. Timmy, at the insistence of his keeper George, also has an icicle as his share of refreshment.

In her recipes for this section, McEvedy includes a detailed recipe for ginger beer just the way the Famous Five love it. A few paragraphs later, Anne wonders whether a cow munching grass in the countryside isn’t tired of eating tasteless grass, when there’s egg and lettuce sandwiches, chocolate eclairs, boiled eggs and ginger beer that can be had. In response, George fantasises about the spread which her mother has laid out for lunch and includes egg and sardine sandwiches and some more ginger beer. Later, Timmy’s taking off after a rabbit in a meadow makes the Famous Five lust for a mouthwatering rabbit’s pie.

Blyton’s infusion of food in this short passage is complete with George offering Timmy raw meat sandwiches which has been packed as picnic lunch.

Blyton’s books will always be remembered by all who read them for instilling a sense of curiosity and innocence to the spirit of adventure. McEvedy’s intervention will now add to this experience the next time you read a Blyton. The taste of adventure may well make our mouth water even more.