CAMBRIDGE, MA–Durba Mitra is Assistant Professor of Women, Gender, and Sexuality and Carol K. Pforzheimer Assistant Professor at the Radcliffe Institute at Harvard University.  Her research and teaching focus on the history of sexuality, the history of science and medicine, and women and gender in South Asia and the colonial and postcolonial world.

“I think in the diaspora, there needs to be a frank and ongoing conversation about patriarchal violence and the widespread problem of domestic violence in the US among South Asians,” says Ms. Mitra. “We must talk about the difficulties women face, at home and as dependents in an unequal family structure, often made to be dependents by the US state and its visa policies.” 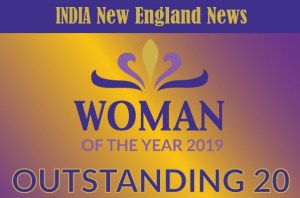 In her current book project, Ms. Mitra examines the central place of sexuality in the development of modern social thought in India and across the colonial world. Her research has appeared in Economic and Political Weekly, History and Technology, and Feminist Studies, and has been supported by fellowships at the Penn Humanities Forum at the University of Pennsylvania, Bowdoin College, and as a Fulbright-Nehru Scholar to India.

INDIA NEW ENGLAND NEWS: Please tell our readers about your work and what you enjoy most about it?

Durba Mitra: I am a scholar of gender and sexuality who uses historical methods to think critically about the role of women and sexuality in modern social thought in South Asia.

My research looks at the history of women, gender, and sexuality to understand how ideas about women and their sexuality shape ideas of what Indian society should look like and how modern citizens should behave. I am a feminist scholar committed to thinking critically and contesting the subordinated place of women and LGBTQ peoples in South Asia and its many diasporas.

DM: One of my most important organizations I participate in is a group called XPMethod, Group for Experimental Methods in Humanistic Research, which I co-founded with colleagues at Columbia who work at the intersection of digital justice and humanistic inquiry.

In our work, we hold workshops on access to knowledge and think critically about how to save the histories of minoritized people in South Asia as well as across the postcolonial world.

We are deeply committed to digitization and educating people about the politics of access for endangered archives of different communities, from women’s organizations in South Asia to immigrant community archives here in the US.

DM: I am teaching and mentoring students and conducting research all the time! But I do love to dance and I love watching cooking shows.

INE: In what way you feel you have most positively influenced or served the local community or your company/organization and professional field?

DM: I am lucky to be part of a dynamic community of scholars committed to feminist work in the study of South Asia and its diaspora. We promote the importance of women, minoritized communities, and queer and LGBTQ people and help assert the critical place of diverse people in our societies.

This research is committed to creating safe and just communities where women and diverse peoples thrive, where they have equity, where they do not live under the persistent fear of domestic violence, of dependency, of a life compromised by patriarchal structures and dominance.

DM: I think there are so many issues women face today, and they are intertwined with large structural issues that subordinate women in structures of the state, of family, in visa status, and in workplace settings. I think in the diaspora, there needs to be a frank and ongoing conversation about patriarchal violence and the widespread problem of domestic violence in the US among South Asians.

There are amazing organizations like Sakhi for South Asian Women that have been doing this critical work of talking about and advocating against violence against women. Sakhi’s work has now been going on for thirty years here in the US. We need more organizations, and more charitable support of organizations that support women in deeply troubling circumstances, and I strongly feel the conspiracy of silence around these issues must change.

We must talk about the difficulties women face, at home and as dependents in an unequal family structure, often made to be dependents by the US state and its visa policies. We need programs that give women resources about financial literacy, about organizations that work against domestic and sexual violence, that help women gain access to independence in this unequal world. And we need to change the unequal structures that organize our communities, everything from household finances to who eats first at a party.

DM: As an academic, I have too many to count! But recently there have been some superb books that I would recommend to everyone. The first is Amy Bhatt’s superb study of gendered inequality in the H1 system, High-Tech Housewives: Indian IT Workers, Gendered Labor, and Transmigration.

The other is an amazing and deeply troubling study by a journalist in India, Priyanka Dubey, No Nation for Women, which reports on the extraordinary and widespread sexual violence women face in India today.

DM: I have too many to name!

DM: Without question, my mother is the most inspiring woman that I know. She is quite simply extraordinary. She is now a retired professor of Statistics and Applied Mathematics, and is also an artist who produces the most beautiful pieces of embroidery.

DM: I cannot think of anyone ONE person. If I could I would have liked to meet many early South Asian feminists who fought for early laws against violence against women, who argued that women should have access to the vote and the right to work and live independently, and some who argued against caste and religious minority discrimination and the central place of gender and sexuality in bias and caste- and communalist based violence.

DM: My values are to be kind, ethical, and recognize the humanity in others, which my mother has taught me. And feminist scholarship has taught me to be unyielding in my commitment to the study and advocacy of women and their right to live in a more equitable world, free of patriarchy and violence.