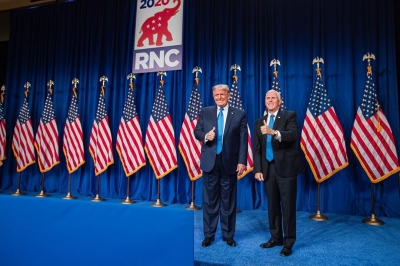 New York– Former US President Donald Trump and former Vice President Mike Pence have returned to the capital making dueling speeches to woo Republican voters, but Trump is emerging on top of Pence and Florida Governor Ron DeSantis, however coming in between them.

Trump and Pence both returned to Washington D.C. to give dueling speeches on Wednesday, indicating they are seeking the party’s attention of November 8 House of Representative’s elections ahead of the 2024 presidential run, says Republican Strategist Scott Jennings in a radio interview to NPR.

He had listened to both speeches, says Jennings, a Republican strategist and a MORNING EDITION regular in the network.

When asked what was his take from both speeches, Jennings said it was remarkable that a Vice President was going to run against his old boss.

“Pence’s messaging is we have to think about the future. And, Trump’s message is, we need to relitigate the past. Right now, Donald Trump is on top of Mike Pence and Florida Governor DeSantis is between them. We’ll see how it turns out over the next couple of years.”

What could be working in the mind of DeSantis in all this? A presidential hopeful for 2024 ticket in Republican primaries, where does he stand? Jennings felt he had the advantage on Pence right now in the polling. He’s on top of Pence of the non-Trump candidates who are seeking the nomination. And he probably thinks it’s a good thing for Pence to be in the race to some degree because Pence’s message is that we need to be conservatives, but we need to move on from Trump.

And that’s what DeSantis needs Republican voters to think. But it may, he may prefer someone else to say that instead of him at the moment. And that’s what Pence is doing.

Trump focused partly on taking a harder line on crime. The US is very much rattled by the series of shootings from Uvalde in Texas to Chicago shootings. Here is the sound bite of the former President. “We need an all-out effort to defeat violent crime in America and strongly defeat it and be tough and be nasty and be mean if we have to,” he said.

What’s the strategy behind Trumps turning attention to this, though it’s known most republicans are influenced by the gun lobby of National Rifles Association.

Jennings response was that violent crime in American cities is a huge issue for Republicans right now. “I thought it was noteworthy, frankly, that Trump spent some time on an agenda other than relitigating 2020. And so, I would say what he said yesterday will resonate with quite a few Republican voters, even people who are nervous about rolling the dice on a candidacy that’s lost the national popular vote in the last two elections. That issue will resonate. Trump’s always been good at finding those kinds of issues that resonate among base Republicans. I think he probably hit on one yesterday.

Pence talked about America’s future in his remarks. Does that resonate with the voters? Now, some people may choose to focus on the past, but elections are about the future. And I believe conservatives must focus on the future to win back America.

Some people? Who’s some people? Oh, it’s quite clear some people is Trump. And if you listen to Pence’s speech, he checked every box a conservative would want to check – strong national defense, pro-life, protect the Second Amendment. So, he hit all the issues. I think the question for Pence is, are Republican voters interested in his kind of candidacy? I mean, he’s not exactly Mr. Excitement out on the stump. And he’s not, he’s never been as good as, at the performative aspects of politics of theater that Trump kind of perfected and that, like, DeSantis and others have sort of emulated in the years since.

We kind of know where he stands on a lot of things, Jennings observed on Pence, but if the GOP is a different kind of party – if it’s indeed and still is Donald Trump’s party, then maybe, Pence, doesn’t have the pizzazz that it requires. “Yeah, there’s an attitude. There’s an emotional aspect. There’s a performative aspect to Republican politics right now. And it’s also wrapped up in having all the right enemies. You know, that’s one of the things Republican voters liked about Trump. He had all the right enemies, whether it was the right Democratic enemies or the national media or what have you.

DeSantis has a knack for having all the right enemies, too. Pence has never really shown that instinct, and that’s where he may come up short if you’re looking at attributes for these candidacies.

It’s actually timely to reference all the speeches of Trump, Pence and DeSantis since the conclusion of the eight hearings of the January 6 committee that laid out bare events on that day and the contrasting reactions both men had of the rioters and the speech approaches by Trump and Pence?

Pence deserves a lot of respect from Republicans, whether he gets the nomination or not. He stood up to the mob, he stood up to the intimidation and he stood for the rule of law. And so he always will deserve Republican and American respect for that, Jennings said, observing that: “I do think Trump’s speech about law and order is something of a reaction to what happened to the Capitol Police on January 6. I mean, it’s hard to reconcile Trump’s message on law and order with what his mob did to the police officers who were bravely defending the Capitol. So, I think there could be some…”

“But you can’t watch that video and not be vibrating angry as a Republican, in my opinion, about what happened to the police officers who were overrun, who were attacked, who were beaten that day. I mean, it’s really terrible. And he’ll never be able to wash that off because it’s on video. We all watched it live, and we’ve all watched it on a loop since that happened.”

According to The Washington Post, the Department of Justice is investigating Donald Trump as part of a criminal probe involving an effort to overturn the election. And it’s important because no former president has ever been charged with a crime.

“I’ve always thought perhaps the Georgia electoral investigation was more dangerous to Donald Trump”, Jennings said adding: “I’ve listened to a lot of lawyers on this, and they’ve always considered a federal indictment to be a longer shot. But certainly, it’s better to not be under investigation by the feds than it is. So, Trump’s obviously in the crosshairs.”

A lot of evidence out there for them to look at. These hearings have been damaging to Trump. Even Republicans who supported him, voted for him twice, are having second thoughts about getting someone the nomination who violated his oath of office on January 6. (IANS)