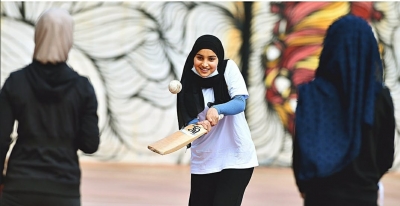 Barcelona– Residents of Barcelona, a hub of Spanish football and home to Lionel Messi’s FC Barcelona, sprang a surprise when they voted for cricket ground above other recreational facilities.

When the city administration gave its citizens a chance to vote for new facilities in a 30 million Euro package, officials were surprised to see creation of cricket ground getting most votes. There were 821 other projects, including cycle lanes and other playgrounds, but they all lagged.

The votes for cricket ground were possible due to a campaign led by a group of young women.

“All the people behind this project are girls. Training gives us a safe space to feel empowered as women and where we can freely develop our skills,” the group wrote in the proposal.

“At the same time, our aim is to establish a Catalan women’s cricket eleven,” it added.

One of the girls said they took up cricket three years ago.

“It all began three years ago in secondary school when the gym teacher said: ‘Right, we’re going to start a cricket club out of school hours. Who’s up for it?'” 20-year-old Hifsa Butt, the eldest of the group, was quoted as saying by The Guardian.

Their first trainer was a Latin American rugby player and she had never played cricket either, according to the paper.

But then Hifsa’s father stepped in. “He taught us a lot about how to play and then we got started on our own,” added Hifsa.

The girls created an indoor cricket league and used to play at weekends on the baseball ground on Montjuïc locality in Barcelona till recently.

However, the start of baseball season has left them without a place to play.

“We want to play proper cricket, with 11 players, with a hard ball and not a tennis ball like we use indoors. So now we need a proper cricket pitch with real, not synthetic, grass,” added Butt.(IANS)