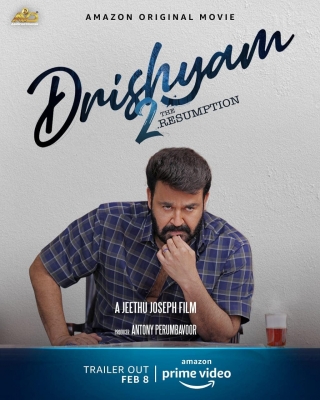 The beauty of Drishyam lay in the finality of its end. As Mohanlal’s Georgekutty buried the truth (literally) and got away with the perfect cover-up, there was hardly scope to dig out anything new, you would think — for scriptwriter or cops.

The challenge therefore lay in undoing an end that had been done so superbly eight years ago. With Drishyam 2, writer-director Jeethu Joseph pulls out a thread of continuity out of almost nowhere, and gives it a spin of imagination to carry the tale forward.

That in itself would be a feat for Joseph as a storyteller. To his credit, Drishyam 2 also has a finale that tops the drama quotient of the first film’s climax.

The sequel starts off on a note of frenzy, as a man on the run is nabbed by the cops in the dead of the night. The bearing of the incident on the film’s core plot will be established much later. For most of the first half, Joseph relaxes the narrative pace, almost as if he was out crafting a family drama about George Kutty (Mohanlal), his wife (Meena) and daughters (Ansiba Hassan and Esther Anil) — the family that got away from the clutches of law after accidentally killing a top cop’s depraved teenage son in the first film.

You realise the easy tone is deceptive soon enough, as an ominous slow burn soaks the storytelling. Although Georgekutty covered his tracks well in the first film, and was cleared of all charges, and although the sleepy village stills very much roots for him, the cops never really stopped suspecting him.

In Drishyam 2, a chance witness emerges, and the case is all set to be reopened.

For the sake of avoiding spoilers, it would be prudent to avoid details about what actually happens. What can be said is that this is a rare film that lives up to the tag of being a sequel to a tremendous entertainer, in many ways topping the original.

Joseph’s biggest asset of course is thespian Mohanlal. Eight years on, Georgekutty is a more affluent member of society. The cable operator of the first film is now a cinema hall owner who harbours the ambition of making a film. He ropes in a semi-retired, veteran screenwriter to pen his script. This sub plot is used brilliantly to create the film’s climax.

Mohanlal revisits Georgekutty with relish. He balances with understated ease the protagonist’s rise in stature with the subconscious fear he constantly lives with — that the police might catch up someday. In fact, Georgekutty’s entire home scenario is portrayed in a similar vein.

He is amply propped by the rest of the cast. Rani, Ansiba and Esther are authentic while portraying Georgekutty’s stricken family. Murali Gopy as Thomas Bastin, the new Inspector General, is outstanding. Asha Sarath makes a late entry as IPS officer Geetha Prabhakar, the dead boy’s mother, and literally walks away with the scene in a crucial interrogation sequence.

The film has its raw edges, though. A couple of court sequences appear to be a rushed job, wedges in unconvincingly into a film that is otherwise so well-penned. The narrative itself could have been tighter in parts, too, rendering a shorter runtime than 153 minutes.

These, though are minor glitches. Drishyam 2 has enough to make you ignore its warts. In one of the final scenes, a key character is heard saying Georgekutty’s saga is not over yet. Sounds tremendous actually, for the franchise sure is emerging as one that comes up with films you can watch again despite knowing the end. (IANS)